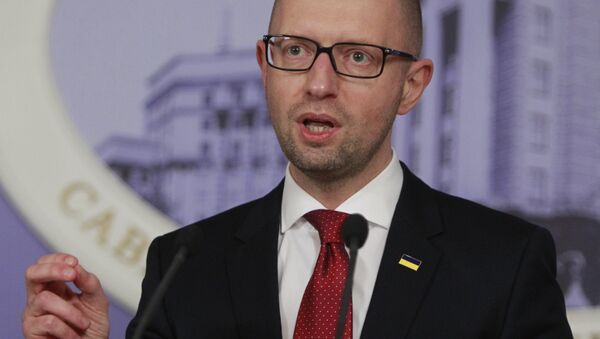 On Sunday, Ukrainian Prime Minister Arseniy Yatsenyuk announced his resignation. However, his decision looks more like a tactical move aimed at "political survival" rather than reforms in the country, the Swedish newspaper Dagens Nyheter wrote.

Yatsenyuk’s Top-7 Awkward Moments as Ukraine’s Prime Minister
Several months ago, the fate of Arseniy Yatsenyuk as Prime Minister was hanging by a thread, but after the recent parliamentary vote his government still managed to remain in power, the newspaper's Moscow correspondent Anna-Lena Lauren wrote.

Now, he suddenly announced that he would voluntarily leave his post in order to better promote reforms in Ukraine. This statement, according to Lauren, "is senseless, if not ridiculous."

Earlier, Yatsenyuk said that destabilization in Ukraine is "inevitable", if a new government is not formed.

In her article, however, Lauren wonders why Yatsenyuk has achieved so little progress during his term if he really wanted to carry out reforms: "Why hasn't he, for example, dismissed the corrupt prosecutor Victor Shokin? And how does Yatsenyuk intend to promote reforms after his resignation?"

The journalist argued that Yatsenyuk's decision to resign looks more like a tactical trick aimed at his own "political survival" and stressed the unpredictability of Ukrainian politics. According to Lauren, the fact that Yatsenyuk announced his plans two days before his actual resignation is suspicious.

"From Sunday evening to Tuesday afternoon everything can happen in Ukrainian politics, and Yatsenyuk knows it," she wrote.

According to Lauren, it is difficult to understand what exactly the politician is up to. However, his behavior clearly demonstrates the main problem in Ukraine — namely "political incompetence, combined with a rare arrogance," the Swedish journalist concluded.