Neither Moscow Nor Washington Want Further Escalation in Syria Amid Truce 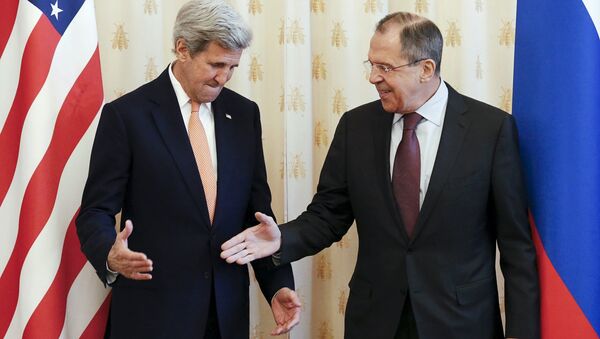 © REUTERS / Maxim Zmeyev
Subscribe
International
India
Africa
As the Syrian crisis has reached the next stage, with a ceasefire and new regulations, the parties involved have articulated new goals and tasks, at times contradictory and vague in nature.

Russian Airstrikes in Syria Laid Basis for Geneva Peace Talks - Lawmaker
In this context, only Russia has reaffirmed its commitment to the peaceful settlement of the conflict, an article in the Lebanese newspaper As Safir read.

The current ceasefire in Syria is fragile, and there is still a risk of escalation on the battlefield.

According to the article, Washington’s position toward the Syrian crisis is not aimed at finding a political solution. What is more, there are still misunderstandings between the US and Russia on the issue.

"But there is one clear fact – neither Washington nor Moscow wants to bear responsibility for further escalation," according to the article.

The US only pretends to be making efforts to resolve the conflict in Syria, the author claimed. Washington’s real goal is to hold up the negotiations in Geneva.

"Defeating terrorists in the region would not serves America’s interests. The US will do everything possible to prolong its controlled war on terrorism until there is time for an advantageous move," the author wrote.

Moscow has offered its own plan to resolve the crisis. According to the plan, the principal precondition for this is the total defeat of the terrorist groups in Syria.

The problem here lies in how far the US is ready to go in cooperation with Russia to work out a compromise. But even if a compromise is reached Washington may not want to pressure its allies to accept it.

The ceasefire introduced new rules on the battlefield and strengthened Russia’s positions in combat and at the negotiating table, the article read.

According to the author, the ceasefire does not mean a strategic breakthrough in the Syrian crisis. Moscow considers terrorism an evil that should be totally eradicated. Russia insists that the so-called moderate Syrian rebels unite forces with the Syrian Army against Daesh. Meanwhile, the US supports those groups and wants them to oppose government forces. Thus, there is still no alternative to the Geneva peaceful process, the article concluded.