Four years after the First International Forum on the conservation of wild tigers was held in St. Petersburg, Russia, the global population of tigers in the wild has shown a significant increase.

Russian Minister Invites DiCaprio to Moscow to Discuss Saiga Antelope
Driven largely by conservation successes in Russia, India and Nepal, the population of this endangered species has increased globally, the first time in more than a hundred years, the World Wildlife Fund (WWF) reports in a new survey.

However, tiger populations are not increasing in all countries. For example, in South-East Asia there has been a continued reduction in numbers, Swedish newspaper Vestmanlands Läns Tidning reported.

These estimates will be presented at the International Forum on the Preservation of Wild Tigers, which will be held in New Delhi. Its goal is to note what has changed in the four years since the first forum in St. Petersburg was held.

Back then the forum was attended by all countries which had a viable tiger population. The aim was to increase the number of wild tigers from 3200 to 6000 by 2022.

Rare Amur Tiger Cub Rescued in Russia’s Primorye
The reason for this has been an effective resistance to poachers and protection of habitats, Vestmanlands Läns Tidning reported.

Hollywood actor Leonardo DiCaprio released a statement after it was announced that the number of wild tigers had increased for the first time after 100 years in decline.

DiCaprio is a part of the WWF and is the head of Leonardo DiCaprio foundation. He has said that his organization aims to double the number of wild tigers by 2022.

Leonardo‘s foundation has donated over $6.2 million since 2010.

In his statement, DiCaprio said that, “Tigers are some of the most vital and beloved animals on Earth. With our partners at WWF, my Foundation has supported major efforts to double the number of tigers in the wild. In Nepal, our efforts have produced one of the greatest areas of progress in tiger conservation, which is helping drive this global increase in population. I am so proud that our collective efforts have begun to make progress toward our goal, but there is still so much to be done. I am optimistic about what can be achieved when governments, communities, conservationists and private foundations like ours come together to tackle global challenges.” 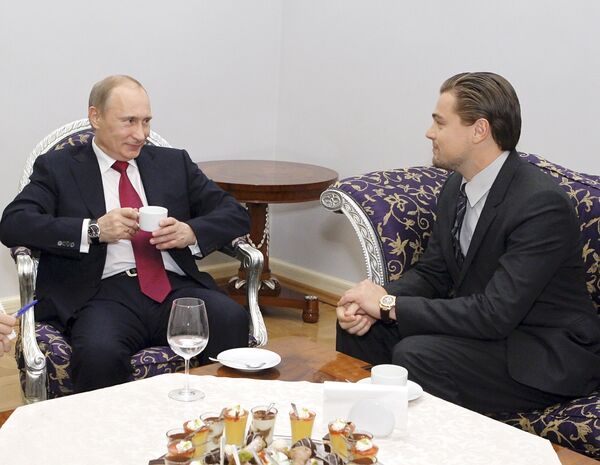 An earlier census of Amur (Siberian) tigers inhabiting Russia’s Far East, home to 95 per cent of the global population of Amur tigers, revealed that the big cats have increased in numbers, largely due to a conservation program launched with the support of the Russian government and through the personal efforts of President Vladimir Putin.

Organized by the Russian government with the support of the Amur Tiger Center and WWF, the current census covered over 150,000 square kilometers of the endangered animal’s habitat.

“The key is strong political support. Where we have it, in countries like Russia and India, we are seeing tremendous results,” said Mike Baltzer, who leads the WWF Tigers Alive Initiative.  “However, in South East Asia, where political support is weaker, we are facing a crisis. These countries stand to lose their tigers if urgent action isn't taken immediately.”