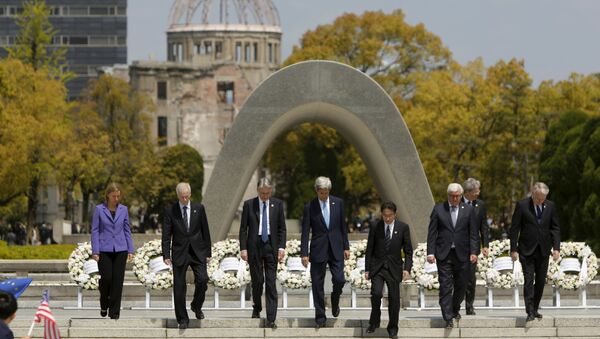 © REUTERS / Jonathan Ernst
Subscribe
International
India
Africa
The G7 foreign ministers called on Monday for transparency in space activities and expressed concern about the development of anti-satellite capabilities, according to a joint communique of the ministerial meeting in Hiroshima, Japan.

G7 FMs Call on Moscow to Comply With Nuclear Forces Treaty – Statement
TOKYO (Sputnik) — In March, US Air Space Command chief Gen. John Hyten told Congress that US global positioning system satellites were likely to be attacked or jammed. According to Hyten, the enemies of the United States are developing tools to degrade and destroy the space capabilities of the country.

"We remain concerned about the development of anti-satellite capabilities. We are committed to enhancing the long-term safety, security, sustainability and stability of the space environment, to increasing transparency in space activities, and to strengthening norms of responsible behavior for all outer space activities," the communique reads.

According to the communique, the ministers did not specify the countries that had been allegedly involved in boosting anti-satellite capabilities.

The two-day ministerial meeting in Hiroshima, which kicked off on Sunday, is part of preparations for the G7 leaders' meeting due to be held on May 26-27 in Japan.