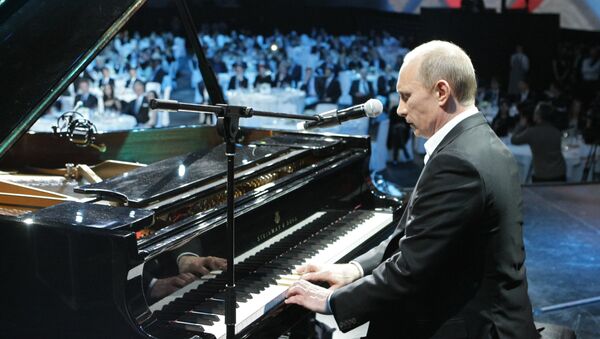 There are numerous cases in which the Russian president has demonstrated his knowledge of foreign languages as a tool in international relations.

During the ONF forum, Vladimir Putin, became an impromptu interpreter for German politician Willy Wimmer, former vice-chairman of the Parliamentary Assembly of the Organization for Security and Cooperation in Europe.

Guitar Heroes and Disco Dancers: World Politicians and Their Hobbies
This gesture was followed by applause and impressed the guests who were present. Later, in an interview with RT, Wimmer said that this was a unique case, as instances in which a head of state plays a temporary role as an interpreter is quite unprecedented.

Back in September 2001, Vladimir Putin made a speech in the German parliament in German taking the deputies by surprise. His speech was met with thunderous applause.

But the Russian president is not just bilingual. He is well versed in English too. His speech at a session of the International Olympic Committee, when Putin presented Russia's bid to host the 2014 Winter Olympics, as well as an appeal to the organizing committee of the Expo world exhibitions during the competition for hosting the event in 2020, both created quite a stir!

However, Putin enjoys foreign languages not only for political purposes. In 2010, as prime minister, he played the piano and sang a song in English called ‘Blueberrry Hill' during a charity evening.