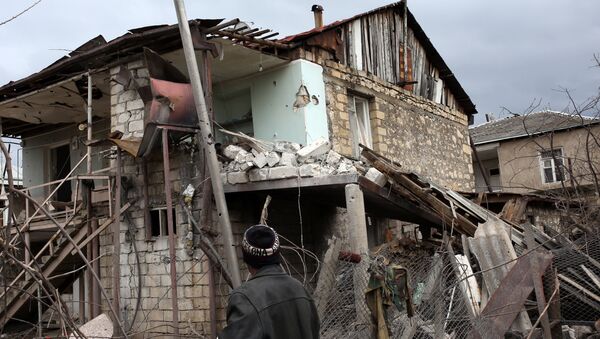 YEREVAN (Sputnik) — Armenia and Azeraijan have agreed to a ceasefire deal in Nagorno-Karabakh on April 5, after several days of intense fighting and losses on both sides.

"The ceasefire on the Karabakh-Azerbaijan contact line has generally been observed. Only the northern front line has seen enemy shelling involving 82-mm mortars and 122-mm D-30 howitzers," the ministry told RIA Novosti.

NKR forces have mainly refrained from retaliating against the attacks, the ministry added.

Tonight the ceasfire agreement was mostly kept, except for the Northern part, where #Azerbaijan used mortar & 122mm howitzer (2 projectile).

Both Sides to Nagorno-Karabakh Conflict Using Mortars, Heavy Ammunition
On April 2, Armenia and Azerbaijan declared a dramatic escalation of hostilities in the Nagorno-Karabakh region. Baku and Yerevan traded blame for breaching the truce in the conflict and reported heavy fighting in the area.