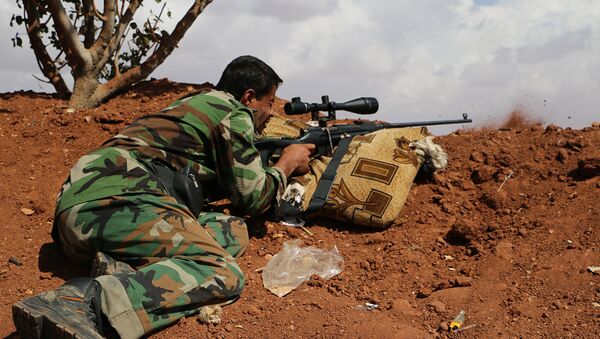 According to the Russian Defense Ministry, Free Syrian Army (FSA) fighters fired a mortar in Syria's Hama, killing one civilian and injuring a woman amid a ceasefire.

O Free Syrian Army, Where Art Thou? Nobody Seems to Know Who, Where FSA Is
The FSA is one of the groups labeled a "moderate" opposition faction by the West. Washington trained and equipped the FSA in the hope that they would counter Daesh, but subsequently shut down this program in October after spending almost $500 million dollars without any tangible results.

Russia and the United States reached an agreement on the ceasefire regime in Syria on February 22. The truce excluded terrorist groups Daesh and al-Nusra Front.

According to the Russian reconciliation center, al-Nusra Front terrorists are boosting their presence near Aleppo.

"According to the information received by the Russian center for [Syrian] reconciliation from local residents and militia forces, al-Nusra Front terrorist group continues to boost its forces northwest of the city of Aleppo. Over the past day two groups of militants of more than 350 fighters armed with two infantry fighting vehicles and 13 off-road vehicles mounted with heavy machine guns arrived in two villages [near Aleppo]."

There have been five violations of the ceasefire regime in Syria over the past 24 hours, according to the Russian ministry.

Militants Violate Ceasefire in Aleppo Province, Syrian Army Retaliates
"The ceasefire regime is generally holding in the majority of the provinces in the Syrian Arab Republic. Over the past 24 hours, five violations of truce have been registered (four in the Latakia province and one in Hama)."

Ahrar ash-Sham group, which had previously agreed to participate in the ceasefire regime, has continued to shell the Syrian army in the Latakia province with mortarts and firearms. Two civilians have been injured.

A total of 60 settlements have joined the ceasefire regime in Syria, the Russian reconciliation center in Syria said Sunday.

"Over the past 24 hours, an agreement has been reached with the elders of a community in the Damascus province. The number of settlements that have joined the ceasefire has reached 60."