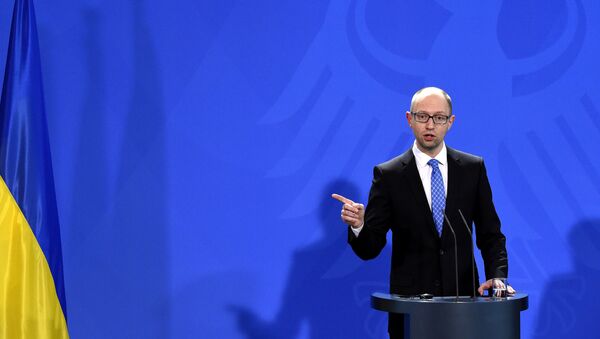 Many were probably wondering why Ukrainian Prime Minister Arseniy Yatsenyuk announced his resignation earlier today. Yatsenyuk came up with nine reasons behind his decision to leave the office, Vesti Ukraine reported.

"I decided to resign from the post of Ukraine's prime minister. On Tuesday, April 12, the decision will be submitted to the Verkhovna Rada [the Ukrainian parliament]," Yatsenyuk said as quoted by Ukrainian TV channels on Sunday.

Yatsenyuk said he's leaving his post due to these nine reasons:

3. Yatsenyuk said he wasn't fighting for his prime minister chair. "The post isn't a privilege, but a tool," Yatsenyuk was quoted.

4. His resignation might restore the coalition majority in the Ukrainian government. Yatsenyuk's party, the Popular Front, will remain a part of the coalition in the parliament.

6. According to Yatsenyuk, his party, the Popular Front, remains his main support and is working to create a new coalition. "Ratings are a changeable thing," the ex-Prime Minister said.

7. Yatsenyuk blamed his coalition partners for weakness, saying they couldn't "sustain high standards" and couldn't "make tough decisions" when they had to be made. He also stressed that if a new government isn't formed, Ukraine would face destabilization.

8. The ex-Prime Minister said he succeeded in making a series of reforms in the army, police, Ukraine's financial and economic development and other areas.

9. Yatsenyuk reminded Ukrainians about his and the Popular Front's program which are the policies of European integration and decent living conditions. In the end, Yatsenyuk wishes his successor the best.