Europe Has a Choice: Democracy or 'Eurocracy' 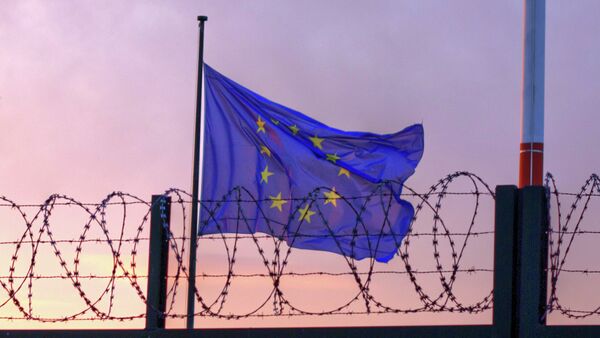 The people of the Netherlands have forced Dutch authorities to take account of their voice, voting against the EU-Ukraine Association Agreement being pushed by Brussels. Unfortunately, Latvians do not have the kinds of opportunities the Dutch do, suggests Juris Paiders, the head of the Latvian Journalists' Union.

Dutch Referendum Results to Strengthen UK Citizens' Anti-EU Sentiment
On April 6, Dutch voters turned out to vote in an advisory referendum on the EU-Ukraine Association Agreement, with 61% voting against the partnership deal. With turnout surpassing the necessary 30% threshold, Amsterdam must now formally reconsider ratifying the treaty.

Commenting on the vote in an op-ed for Latvia's nra.lv news portal, Paiders suggested that when it comes to democracy, the Latvian people don't have the same opportunities the Dutch do.

"If such a non-binding referendum was held in Latvia, I am absolutely confident that the majority of the government's ruling coalition would simply spit on its results." This sentiment, the journalist noted, is based on precedent. "This already happened [in 2003] when 80% of Latvians rejected our country's participation in the Iraq War, while the Latvian elite was at the forefront of the warmongers. Ultimately, Latvia was drawn into the war, the justification for which was falsified, and as a result, the region's security suffered."

Fortunately, Paiders wrote, "the Netherlands is not Latvia. In Latvia the political elite, step by step, is liquidating democratic values. In Latvia, referendums and other forms of direct democracy are being replaced with a system of totalitarian punishments and prohibitions. Conversely, the Netherlands' largest parties have promised to take the will of the people into account."

"The Dutch referendum explains well why the ruling coalition in Latvia is so afraid of democracy. When referendums are factually banned, the political elite can do whatever it wants with the country. It can reduce spending on health and education, and allocate more funding for politically corrupt procurement schemes. It can [also] agree to speed up the EU's federalization, and remove all national boundaries, in spite of the attitudes of the majority of the people."

EU 'Has Turned Into a Henhouse Without a Rooster'
Part of the problem, the journalist explained, doubtlessly stems from the government's hysterical anti-Russian attitudes. "If this kind of referendum took place in Latvia, and had the same results, thousands of commentators would come out of the woodwork to say that Kremlin propaganda is to blame for everything."

"In Latvia, such a result (if a referendum was allowed in the first place) would be presented as exercise of faith by active and poorly educated people who have been influenced by Russian propaganda channels. This, after all, would be the easiest thing to do. As soon as someone opens his mouth to criticize the government's stupidity, one must immediately and publically declare that this person is a zombified Putin agent, and sweep the problem under the rug and forget about it for years at a time."

"In the Netherlands," Paiders wrote, "one can't simply use such arguments. There are no Kremlin propaganda channels there, and no Russian speakers, on whom every problem can simply be written off."

The journalist also hinted that the Dutch vote proved the value of alternative sources of information. "In order to get the necessary support, voters in the Netherlands were reminded of the victims of the downed Malaysian airliner (more than a hundred of the victims were Dutch citizens), and the connection between this mass murder to pro-Russian forces or even Russia itself."

Poroshenko Calls Dutch Referendum on Ukraine an 'Attack on European Values'
"Why didn't the argument help? Because, in contrast to Latvia's information space, where the results of the investigation on the downing of the airliner were presented very selectively, the Dutch information space also took into consideration those areas of the report that we hushed up. Regardless of the color of the uniforms of the criminals that fired the missile, it was the Ukrainian state which allowed for a vulnerable civilian aircraft to fly over territory where military activity was taking place, and where several military aircraft had already been shot down. The airline was deceived when it was told that the route was safe."

Ultimately, Paiders noted, "the results of the referendum may be interpreted as a cynical and pragmatic gesture. They may be used to improve relations between the EU and Russia. The Association Agreement was one of the issues that aggravated relations between Russia and the West," and now it is under threat.

"However, apart from pragmatism in international relations, there is also a value called humaneness. Yes! The Dutch are entitled to make decisions about the future of their country."

As for Ukraine, the journalist noted that what the country needs now is moral support, to slowly but surely clean itself "from the anthill of offshore companies and corrupt officials who are stealing the country's future and preventing this country, richly endowed with natural resources and an educated populace, from flourishing."