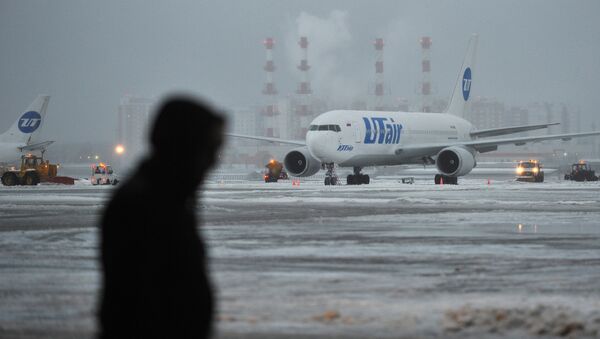 © Sputnik / Ramil Sitdikov
/
Go to the photo bank
Subscribe
A Russian pilot let some of his passengers hitch a ride to their destination airport after poor weather led him to land at a different airport.

Passengers of a UTair plane in Russia were able to hitch a ride to their airport on a virtually empty plane, to avoid missing a transfer after fog caused it to land at a different airport.

The plane was originally destined for Vnukovo airport near Moscow, but had to land at nearby Domodedovo airport, 45 kilometers away, because of fog. The pilot was initially going to make Domodedovo his final destination, but decided to take the passengers to Vnukovo after learning from the cabin crew, that some passengers were worried about missing a transfer flight.

"After weather improved, the plane was sent to the destination airport, delivering passengers to Vnukovo. The plane landed in Vnukovo at 08:39 local time," a UTair representative told RIA Novosti.

Cyprus Starts Process of EgyptAir Jet Hijacker Extradition to Egypt
Passengers had to spend two hours on the plane, while taking a taxi from one airport to another, would take over an hour alone in morning traffic, not including the time it takes to receive luggage, check it and go through security at the next airport.

The plane was traveling to Moscow from Khanty-Mansiysk, capital of the oil and gas-rich Khanty-Mansi Autonomous Region.

000000
Popular comments
That is service, it would not happen in the west