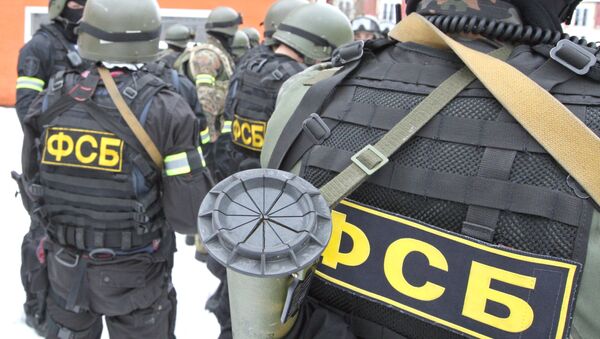 © Sputnik / Igor Zarembo
/
Go to the photo bank
Subscribe
According to reports, Russian Federal Security Service has uncovered a group allegedly linked to the Daesh, that was plotting a terrorist attack in the city of Volgograd.

Russia Verifying Reports on Release of Citizen With Alleged Daesh Links
MOSCOW (Sputnik) – The Russian Federal Security Service (FSB) has uncovered a group allegedly linked to the Daesh, which is prohibited in numerous countries including Russia and the United States, that was plotting a terrorist attack in the city of Volgograd, the FSB said in a statement Friday.

"Five radical Islamists were detained, including a member of this group, who planned to commit an act of terrorism in the region. Ammunition, explosives, other chemical components and sniper rifle parts, and extremist literature were found at their place of residence and seized," the FSB said in the statement.

It was added in the statement that the Daesh-linked group's activities took place in Russia's town of Pallasovka near the border with Kazakhstan.

"[The Islamists] were recruiting the local residents and inducing them to participate in the activities of the Daesh international terror organization," the statement read.

Daesh, a group in control of large territories in Syria and Iraq, is notorious for recruiting people into its ranks from all over the world, using all available means of propaganda.

Russia, like other countries around the world, has been exposed to the risk of becoming a potential recruiting ground for radical Islamist networks. In December 2015, the FSB estimated that up to 2,900 Russian nationals were suspected of participation in Daesh-linked activities.