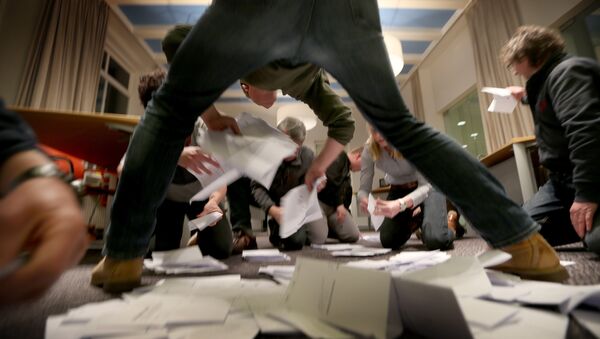 Wolfgang Gehrcke, the deputy chairman of German parliamentary group Die Linke said that the Dutch referendum is a very strong signal for the UK that will hold in June an in/out referendum.

Dutch Referendum Reflects Opinions on Brussels - Russian Ambassador to EU
MOSCOW (Sputnik) — The UK voters desire to leave the European Union will be encouraged after the refusal of the majority of the Dutch citizens to back the ratification of the EU-Ukraine association deal, the deputy chairman of German parliamentary group Die Linke told Sputnik Friday.

“The Dutch referendum is a very strong signal for the UK that will hold in June an in/out referendum,” Wolfgang Gehrcke, who is on a trip to Moscow, said.

On Wednesday, two thirds of the Dutch people voted against the Netherlands government’s decision to ratify the EU-Ukraine association deal signed in 2014, according to preliminary referendum results. The same day, Dutch Prime Minister Mark Rutte said that the Netherlands could reconsider the ratification of the EU-Ukraine association deal as the majority of the population says "no."

“The Dutch said the result would be taken into account, but the European Commission said it did not matter. So the UK will see Brussels being indifferent to the will of the Dutch people,” Gehrcke said.

Gehrcke said that the referendum means the agreement reached by Brussels and Kiev should be revised and new talks are needed.

Dutch Ukraine-EU Referendum Results Put a 'Nexit' on the Horizon
UK nationals are set to vote on June 23 in a referendum on the country's EU membership, after Prime Minister David Cameron and the leaders of the 27 European Union member states reached a deal in February to grant the United Kingdom a special status within the bloc.

The EU-Ukraine Association Agreement, establishing a political and economic association between Kiev and Brussels, was signed in 2014. It commits Kiev to implementing vast reforms in order to meet the bloc’s high economic, political, social, legal and technical criteria. It also grants Ukraine expanded access to the EU single market.

The Netherlands is the only member state yet to ratify the agreement. The Dutch government decided to hold a non-binding referendum after over 400,000 people signed a petition to put the matter to a nationwide vote.