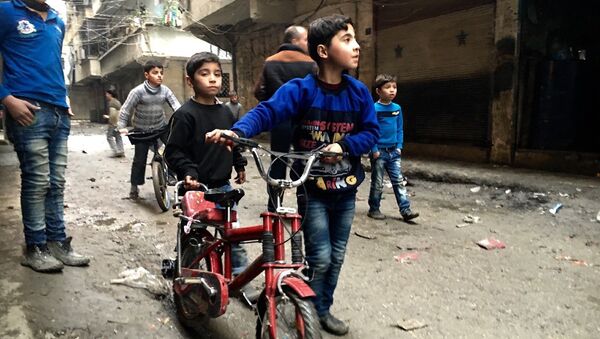 Jaish al-Islam (Arabic for 'Army of Islam) has confirmed the use of chemical weapons in clashes with the Kurdish People's Protection Units in the city of Aleppo, according to a statement.

On Thursday, the Sheikh Maqsood district was reportedly shelled with chemical agent-containing weapons. Videos uploaded by activists showed a yellow cloud rising above buildings, while the Kurdish Red Crescent later stated that the hospitalized victims of the attack displayed signs of Chlorine poisoning.

"Jaish al-Islam's fighters confronted the attempts of the PYD's Kurdish militia to control the Sheikh Maksoud neighborhood… During these confrontations, one of the field commanders in Jaish al-Islam in Aleppo used weapons that he was not authorized to use in this kind of confrontation, which is considered a violation of the internal regulations of Jaish al-Islam," the groups' spokesman Islam Alloush said in the statement, published on the Conflict News website, on Thursday.

Islamist Terrorists Use Chlorine in Attack on Syria's Aleppo
The group's field commanders responsible for the attack will be tried in accordance with Jaish al-Islam's penal code, the statement said, adding that while the group is concerned with the lives of civilians, its strategy in fighting the PYD in Aleppo will not change.