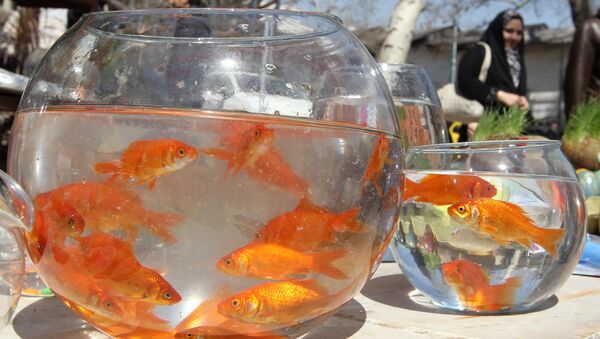 Iranian authorities are encouraging citizens to abandon their long-standing tradition of releasing goldfish into the wild on the thirteenth and final day of Nowruz celebrations, as these cute little specimens can actually prove to be a terror to native species.

“Some residents carefully release their goldfish into the rivers on the thirteenth and final day of Nowruz celebrations, Sizdah Bedar, but they don’t even realize that the number of these fish is constantly growing and is gravely damaging the native species of the basin,” the country’s news agency Isna quotes Ali Timouri, the head of the fishing and hunting department of the Iran’s Environmental Protection Organization (IEPO) as saying.

He added that the growing number of goldfish is leading to the extinction of some rare species.

“A good example is the salmon trout, which inhabit the Hermez river. When the goldfish grow in number, the trout becomes its prey, resulting in their extinction. The IEPO is greatly concerned with this problem,” Ali Timouri said.

​The expert added that in case people still choose to follow the tradition, he would recommend to get some other type of fish and to forget about goldfish altogether.

The same view is echoed by the Canadian Alberta Environment and Parks Association.

Its aquatic invasive species coordinators warn that the size of a goldfish is limited in the tank, but when it is released into the wild, it can carry on growing to enormous sizes.

“Like other species of carp, the domestic goldfish will basically keep growing as long as water temperatures and food resources support it,” warns Kate Wilson, the aquatic invasive species coordinator at Alberta Environment and Parks.

​“There are obviously limits — you're not going to accidentally create fishzilla if you overfeed your goldfish — but given a big body of water with tons of food and warm summers, a fish is bound to get supersized,” she adds.

It is interesting to note that Iranian President Hassan Rouhani appears to have signaled his support for the initiative in a tweet wishing his compatriots a happy new year.

Iranians traditionally mark their new-year festival, Nowruz, with a table display known as Haft Seen. A goldfish bowl often features among an array of symbolic items on show, with the fish representing life.

​A photo posted on his official Twitter account shows President Rouhani's goldfish bowl however is missing its fish, which has been replaced with an orange.