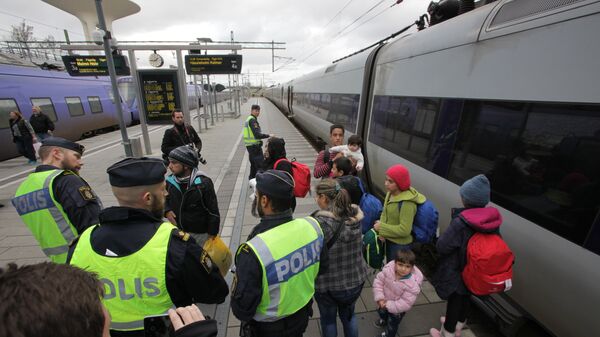 Danish Minister for Immigration, Integration and Housing said that copenhagen and Oslo are keen on preventing the uncontrolled flow of migrants from moving further into Europe's north.

Tough Legislation Allowed Denmark to Reduce Influx of Migrants
MOSCOW (Sputnik) — Copenhagen and Oslo are keen on preventing the uncontrolled flow of migrants from moving further into Europe's north, Danish Minister for Immigration, Integration and Housing Inger Stojberg said at a press conference with her Norwegian counterpart Sylvi Listhaug.

"I have been looking forward to speaking with my Norwegian colleague, since we have a joint interest in ensuring that the stream of refugees into Europe doesn't move to the North," Stojberg said on Friday.

Listhaug arrived in Denmark on Friday and visited the tent camp for asylum seekers in Naestved.

"Inger Stojberg and Sylvi Listhaug have been discussing the current refugee situation, and Sylvi Listhaug has been shown examples of Danish housing of refugees and general initiatives aimed at refugees," a spokeswoman for Danish Ministry for Immigration, Integration and Housing, Sarah Andersen, told Sputnik on Friday, commenting on the agenda of the two ministers' meeting.

"Norway has also shown an interest in tent camps, so it made good sense to show her [Listhaug] our camp in Naestved which is a good way of housing single men in the asylum system," Andersen added.

On Tuesday, Listhaug presented to the Norwegian parliament her final proposals on toughening the country's refugee policy. Following her presentation several Danish parties, according to reports in some local media, have pressed the government to copy a proposed Norwegian provision that would allow for denying refugee status to asylum seekers who do not come directly from countries in conflict or in emergency situations.

Last year, Norway received over 31,000 asylum seekers while the number of refugees that applied for asylum in Denmark exceeded 21,000.