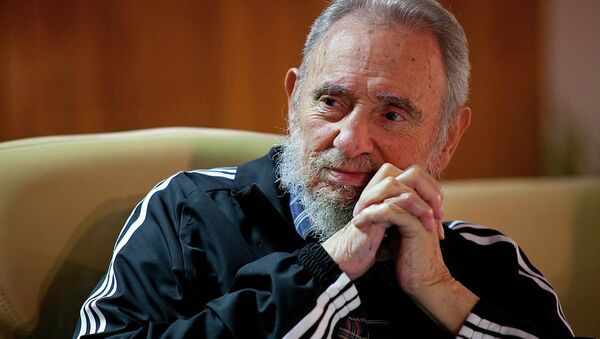 Fidel Castro has made the first public appearance in the past eight months, marking the birthday of his late sister-in-law, Vilma Espin, by visiting a school named after the revolutionary leader.

MEXICO CITY (Sputnik) – Former Cuban president Fidel Castro has made the first public appearance in the past eight months, marking the birthday of his late sister-in-law, Vilma Espin, by visiting a school named after the revolutionary figure, local media report.

Castro, 89, usually receives political leaders at his home in the capital Havana. He made his previous public appearance in the summer of 2015.

Fidel Castro on Obama's Visit: Cuba Can Do Without US 'Gifts'
In late March, the leader of the historic Cuban Revolution said in an article published in the daily newspaper Granma that Cuba does not need gifts from the US "empire."

Castro's remarks came in the wake of US President Barack Obama’s historic three-day visit to Cuba, the first by a US president since 1928.

Castro criticized Obama's calls "to forget the past and look to the future" in bilateral relations "after a merciless blockade that has lasted almost 60 years." Many Cubans hope that their island will come to experience the economic growth witnessed by communist China and Vietnam following a relaxation of restrictions on trade; despite wide-ranging subsidies on basic necessities, Cubans only earn an average of about $20 per month, less than their peers in poverty-stricken neighboring Haiti.

Fidel Castro gave up his presidential position in 2008 after a serious illness and his brother, Raul Castro, was voted in as president. Vilma Espin was married to Raul Castro; she died in June 2007.

In December 2014, Obama announced that the United States would begin to normalize relations with Cuba after more than 50 years of non-engagement and hostilities. While the two countries reopened embassies in their respective capitals in July 2015, the congressionally-mandated US trade embargo continues to remain in effect.

Fidel will turn 90 in August.