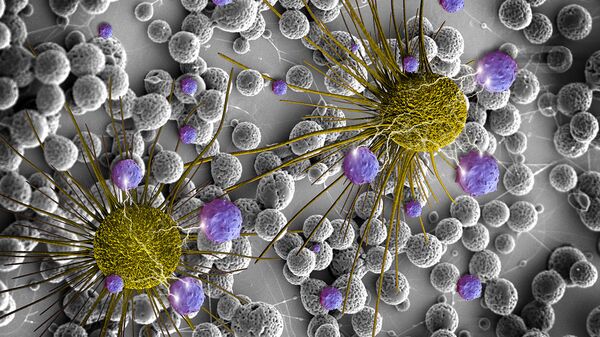 Biologists have discovered one of the ways in which cancer cells resist treatment, by "stealing" normal blood vessels from surrounding tissue.

Health Risk: People Are Ingesting Plastic By Eating Ocean Fish
A new study is the first to show that tumors use a process called "vessel co-option" to become resistant to drugs, raising hopes that doctors can design new therapies which combat the process.

The formation of new blood vessels, a process called angionesis, is a normal part of growth and healing but also plays a role in several diseases, including cancer. Several anti-angiogenic drugs have been developed to treat cancer, but tumors often become resistant to the treatment.

Shocking Discovery: Lipsticks May Contain Cancer Causing Toxins
In a paper published on Thursday in the Journal of the National Cancer Institute, biologists at London's Institute of Cancer Research and the University of Toronto showed that it could be possible to treat cancers by designing new therapies that block vessel co-option, as well as angiogenesis.

"In the future, we hope our results will lead to the development of new drug types that target vessel co-option. We believe that drugs which are designed to target vessel co-option could be particularly effective when used alongside existing therapies that block new blood vessel growth," said Dr. Andrew Reynolds, Leader of the Tumor Biology team at the Institute of Cancer Research.

The scientists examined a type of liver cancer in mice which can develop a resistance to anti-angiogenic drugs.

In this video Dr. Andrew Reynolds, Leader of the Tumor Biology team at the Institute of Cancer Research, explains how cancer thwarts treatment by "stealing" blood vessels.

"Although the current study was focused on liver cancer in mice, we are also currently investigating whether our results are relevant for patients affected by breast and bowel cancer. Our research also emphasizes the importance of further studies to better understand the process of vessel co-option, which seems to play an important role in tumour growth but has been relatively under-studied," Reynolds said.