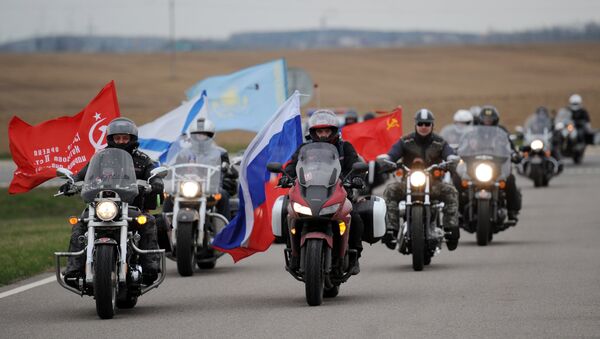 Russia's "Night Wolves" motorcycle club is planning a new ride from Moscow to Berlin in honor of Victory Day, despite being banned from entering Poland in 2015.

Although Poland previously refused to let in Russian Night Wolves bikers, traveling to Berlin for Victory Day, they are back and this time, have all possible paperwork in order, the ride's organizer told Sputnik Czech Republic.

Last year's hysteria in Europe around the motocross "Night Wolves" in honor of Victory Day on the route Moscow-Berlin, excesses in Poland, defiantly prohibit them from entering their territory, no one is scared.

"This year, the column will be more numerous, we all have Schengen visas on our hands,"event organizer Andrew Bobrovski told Sputnik Czech Republic.

Night Wolves Bikers Will Make Trip to Berlin, Don't Expect Ruckus in Poland
He added that the bikers are not afraid of difficulties, though, they expect provocations. But for the past year we have seen all that we have — a peaceful mission.

The official number is 40 bikers, although the number is expected to rise to 100 after other bikers join the group once it crosses the Polish border. According to Bobrovsky, no one is planning on "traumatizing" the local authorities with Soviet and Russian symbols, except the flag of victory. On May 3, they will arrive in Brno, where they will meet with Czech partner club Red Eyed Crüe.

"I met the Night Wolves by accident 15 years ago, when I worked in an engineering firm, which worked on exports to Russia. I often went there and found this bike club, made contact over the phone. One day they called me and said: 'We are riding from Karlovy Vary to Prague. Do you want to join?' I said: 'I agree', he told Sputnik Czech Republic.

Night Wolves Bikers Will Make Trip to Berlin, Don't Expect Ruckus in Poland
"In Brno, where this year we combine our column with the "Night Wolves", big celebrations in honor of Victory Day are expected. At the place of the honorable burial of the Red Army, the Central Cemetery, together with us will be the Russian consul, city leaders and the South Moravian region. From there the tour proceeds to Slovakia, to lay wreaths at Bratislava's Slavin. Then, Vienna, from the Czech-Austrian border on the highway D1 going to Prague. Now we are waiting for permission from Prague Magistrates to perform a few memorable laps on Wenceslas Square on May 7 together with the Russians. We will ride to Olshany to honor the memory of Soviet soldiers resting there. And then a joint roll Berlin, a military memorial in Treptow-park," he added

Bobrovsky added that he does not believe that European authorities are afraid of the bikers themselves.

"They are not afraid of bikers, they are afraid of the truth we bring. After all, everyone will see that we come in peace, not war, with a hand of friendship outstretched toward European neighbors. It breaks the stereotype of Russia, which the local media imposes," Bobrovsky told Sputnik Czech Republic.