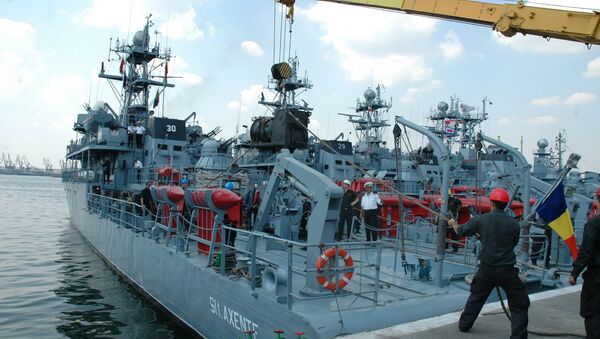 © Photo : Ministry of National Defense of Romania
Subscribe
Romania is calling for the creation of a new, NATO-supported 'allied fleet' in the Black Sea, including non-NATO members Ukraine and Georgia; Defense Minister Mihnea Motoc told Romanian media that Bucharest would be pushing the idea at NATO's summit in Warsaw in July. What's behind the initiative, and how will Russia respond? Sputnik investigates.

"Basically, the formula will be open to those countries along the Black Sea which are not NATO allies, but partner countries, including Ukraine and Georgia; of course it will also be open to some [NATO] allies that are not Black Sea countries, but which have a regular or continuous presence in the Black Sea, participating in exercises or port visits – I have in mind here first and foremost the United States," Motoc said, in an interview for Romanian news portal Hotnews.ro earlier this week.

Kiev and Tbilisi have already "given signals that they may be interested in joining this unified platform," Motoc said.

At the same time, he suggested, somewhat unconvincingly, that the initiative "is not directed against anyone, and does not apply to anyone in particular, be it the Russian Federation or anyone else," but that "certain developments, be it the illegal annexation of Crimea, instability in eastern Ukraine," or the "military buildup" in the Black Sea," prompted the idea.

Aquatic Force: Battle Dolphins Set to Serve in the Russian Military
Moreover, Motoc noted, Romania has plans to modernize its fleet, with the help of its international partners.

Studying the Romanian defense minister's comments, and the prospects for his proposals actually being implemented by the North Atlantic Alliance, Russian officials and defense analyst hinted that they would not be losing much sleep over the initiative.

Speaking to independent Russian newspaper Svobodnaya Pressa, Vyacheslav Tetekin, a member of the Russian Duma's Committee on Defense, said as much, noting that "the alignment of forces in the Black Sea will not change from the Romanian defense minister's empty words."

This, Tetekin suggested, would remain the case "even if we assume that several Black Sea countries will pool their scant naval forces under a single operational command under the auspices of NATO."

For starters, the lawmaker noted, "the Georgian Navy ceased to exist in August 2008. Even before that, it was virtually a non-entity, with a few rusty minesweepers and patrol boats." At the same time, he added, "Ukraine's Navy is in a very sorry state. They have only one frigate-class warship, capable of limping its way into the Mediterranean. It cannot be expected to perform any great feats."

Trump Slams NATO Allies, Calls for Breakup of Military Alliance
"Romania's fleet is a bit more respectable – including about a half-dozen frigates, missile boats and minesweepers. However, most of the ships are out of date. Speaking about the Romanian armed forces in general, one can paraphrase one German general, who put it like this: 'if they are against us, we would need ten divisions to break them; if they were our allies, we would need the same ten divisions to defend their army.'"

In any case, Tetekin noted, what's important to understand is "that Romania has a great wealth of experience extorting money from its strategic partners. While it was an ally of the Soviet Union, the country's leaders strenuously pushed for assistance from their 'big brother' to build socialism. Now, with even more pressure, they are asking their new overseas patrons to give them more money for 'defense' against their former patrons. And in order to avoid the impression that they are asking only for themselves, they decided to drag Ukraine and Georgia into it."

"I do not doubt that both Tbilisi and Kiev will accept this idea with great enthusiasm, because the leadership of those countries too likes any and all ideas that would give them a chance to draw even a little money from Uncle Sam's pockets. Perhaps they hope that under this 'allied fleet' idea, they might receive a few warships, or help in the construction of military infrastructure."

"However," the lawmaker emphasized, "the Americans are practical people; they understand very well that the transfer of warships to their vassals will not raise the fighting capacity of these countries to any significant extent, because Ukraine and Georgia would be unable to maintain them in an acceptable state for very long."

Turkish Navy Enters Ukraine Port as Part of Military Cooperation
Moreover, Washington already has a Black Sea ally – Turkey, "which already has a pretty good navy. They have no interest in frittering away their resources on Romania or Georgia; they are not fools to invest money into such an obviously disastrous venture."

For his part, Mikhail Alexandrov, a senior expert at the Center for Military and Political Studies at the Moscow State Institute of International Relations, suggested that in addition to the financial dimension, there's also the legal aspect to consider.

"NATO warships cannot stay in the Black Sea on a permanent basis, in accordance with the Montreux Convention. They could fly a Romanian flag; however, I doubt that the US or other naval powers would actually agree to transfer ships for use by Romania."

Ultimately, Alexandrov suggested, "NATO has enough of its own problems, and hardly needs to get involved in regional squabbles," such as Georgia's issues with Abkhazia. In any case, "NATO ships already enter the Black Sea on a rotating basis. Therefore, it's likely that this whole story is within the scope of information warfare [against Russia]."

000000
Popular comments
Of course NATO and the Americans have to pay for the Romanian Navy because they are broke. So what else is new here. More freeloaders for NATO and Europe to support.

siberianhusky
8 April 2016, 00:03 GMT1
000000
Russia's fault for been shifting feet. Russia could had Georgia long ago. Or end all trade too. Russia can make wines. By pass the gas transit too to end issues. That's how you TACKLE NATO. The same way they tackling Russia. Sanctions, Import substitution. Because every currency unit is to pay NATO and weapons. And they be costly to Russia that will have to overcome it all. Romania only looking to gain importance and a base to have business. that's why they opening all those bases too. To sell to soldiers etc. And like HITLER they getting close with bogus excuses. Now NATO want to talk with MOSCOW.MOSCOW is a political forum. Talk with CSTO. CSTO is growing . And will be a POWERFUL FORCE. Georgia could had been in CSTO long ago. Or SHUN THEM. Like E.U NATO do.IF you don't sign up, the next guy will. A coup next day.
cast235
7 April 2016, 22:10 GMT
000000
Newsfeed
0
New firstOld first
loader
LIVE
Заголовок открываемого материала
Access to the chat has been blocked for violating the rules . You will be able to participate again through:∞. If you do not agree with the blocking, please use the feedback form
The discussion is closed. You can participate in the discussion within 24 hours after the publication of the article.
To participate in the discussion
log in or register
loader
Chats
Заголовок открываемого материала
Worldwide
InternationalEnglishEnglishMundoEspañolSpanish
Europe
DeutschlandDeutschGermanFranceFrançaisFrenchΕλλάδαΕλληνικάGreekItaliaItalianoItalianČeská republikaČeštinaCzechPolskaPolskiPolishСрбиjаСрпскиSerbianLatvijaLatviešuLatvianLietuvaLietuviųLithuanianMoldovaMoldoveneascăMoldavianБеларусьБеларускiBelarusian
Transcaucasia
ԱրմենիաՀայերենArmenianАҧсныАҧсышәалаAbkhazХуссар ИрыстонИронауОssetianსაქართველოქართულიGeorgianAzərbaycanАzərbaycancaAzerbaijani
Middle East
Sputnik عربيArabicArabicTürkiyeTürkçeTurkishSputnik ایرانPersianPersianSputnik افغانستانDariDari
Central Asia
ҚазақстанҚазақ тіліKazakhКыргызстанКыргызчаKyrgyzOʻzbekistonЎзбекчаUzbekТоҷикистонТоҷикӣTajik
East & Southeast Asia
Việt NamTiếng ViệtVietnamese日本日本語Japanese俄罗斯卫星通讯社中文（简体）Chinese (simplified)俄罗斯卫星通讯社中文（繁体）Chinese (traditional)
South America
BrasilPortuguêsPortuguese
NewsfeedBreaking
12:32 GMTFight for Heavyweight Championship Title: Usyk vs Joshua Weigh-In
12:27 GMTREC Surveys Exporters’ Wishes for ‘Single Window’ Development
12:21 GMTNew Huge Space Cavity of Unknown Origin May Explain How Stars Are Born, Scientists Suggest
12:11 GMTTaliban Still Waiting for US Response on Unfreezing Afghan Assets, Deputy Minister Says
12:02 GMTPowerful 6.1-Magnitude Earthquake Hits Adak, Alaska
11:50 GMTTexas Sec of State's Office Announces 'Full Forensic Audit' of 2020 Election in Four Counties
11:49 GMT'Georgina is a Great Support to Cristiano': Ronaldo's Mom Denies Rift With His Girlfriend
11:40 GMTCongress is a Sinking Ship, Says BJP-Allied Nishad Party Chief in Poll-Bound India's Uttar Pradesh
11:33 GMTFinal Countdown: Who's Leading in Polls Ahead of German Federal Elections?
11:27 GMTMexican Authorities Block Haitian Migrants From Crossing Into US, Seal Off Makeshift Camp
11:26 GMTErdogan Expects Russia to Change Approach to Syria
11:14 GMTIndia's Top Investigative Agency to Probe Influential Monk's Mysterious Death
11:13 GMTSabina Nessa: Police Ask For Help in Identifying Man After Teacher Murdered in London Park
11:11 GMTUK Ministry of Defence Confirms Second Afghan Data Breach, Vows to Prevent New Ones… Again
11:06 GMTKim Jong-un's Sister Responds to Seoul's Proposal to Officially End the Korean War
11:01 GMT'Actors Started Taking Liberties With Me': Actress Mallika Sherawat Recalls Facing Casting Couch
10:58 GMTMerkel Ignored Biden When He Wanted to Make Her His First Call as POTUS, Report Says
10:28 GMTTaliban to Submit Complaints to UN Over US Shooting at Kabul Airport
10:27 GMTEchoes of Tony Blair’s Fuel Crisis in 2000 as UK Petrol Stations Run Out Due to Trucker Shortage
10:18 GMTAUKUS Creation Resulted in Loss of Trust in Biden Administration, Merkel's Ex-Adviser Says