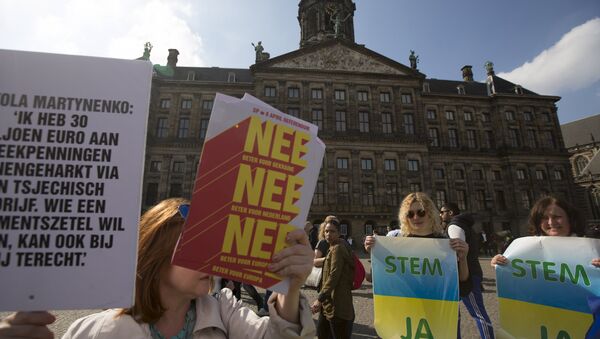 Russian Duma Speaker Sergei Naryshkin said that it is a pity that only in the Netherlands local laws allowed the people to speak out on on important issues of the European Union’s external policy.

On Wednesday, 61.1 percent of Dutch voters rejected the EU-Ukraine association deal’s ratification in the advisory referendum, according to preliminary results. A turnout of 32.2 percent passed the 30-percent threshold to give the public vote legal weight.

"It is a pity that only in the Netherlands local laws allowed the people to speak out on this important foreign policy issue, and the referendum results clearly showed what the ordinary citizens think about Ukraine's sped-up European integration," Naryshkin told reporters.

Dutch Party for Freedom Say EU Must Heed Country's Rejection of Ukraine
In 2014, Kiev and Brussels signed an agreement aimed at Ukraine's political association and economic integration into the bloc.

The Netherlands is the only member state that has not yet ratified the agreement. The Dutch government decided to hold a non-binding referendum after over 400,000 people signed a petition to put the matter to a nationwide vote.