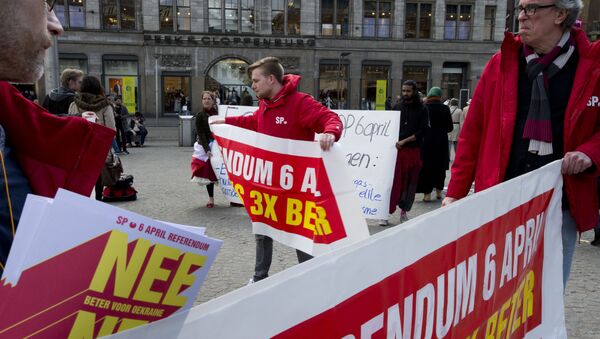 Raymond Finch, a UK Independence Party (UKIP) member of the European Parliament said that the EU officials are absolutely terrified after 61.1 percent of Dutch voters rejected the EU-Ukraine association deal’s ratification in an advisory referendum.

Dutch Party for Freedom Say EU Must Heed Country's Rejection of Ukraine
MOSCOW (Sputnik) — The EU officials are terrified of the end of the bloc looming after the Dutch citizens voted in a referendum on Wednesday against both the EU-Ukraine association and the Brussels policymaking in general, a UK Independence Party (UKIP) member of the European Parliament told Sputnik Thursday.

On Wednesday, 61.1 percent of Dutch voters rejected the EU-Ukraine association deal’s ratification in an advisory referendum, according to preliminary results. A turnout of 32.2 percent passed the 30-percent threshold to give the public vote legal weight.

“They [Brussels] are absolutely terrified. The people over there are already talking of it as being the beginning of the end of the European Union,” Raymond Finch said.

The Dutch Had Their Say: Media Reaction to EU Treaty Referendum
He added that this momentum will be supported by the referendum on the EU membership in the United Kingdom, "and we will see more and more things like what happened in the Netherlands yesterday."

“When we have our vote on the 23rd of June, and I think we will vote to get out, more and more people across Europe will say we want out as well. And it will also lead to separatism movements, people like the Basques, the Catalans, they will say that it is a prospect for having their own nation states again. This is what it is all about – democracy and self-determination, and the EU hates it, but they see that this movement is unstoppable," Finch pointed out.

The Netherlands is the only member state yet to ratify the agreement, which requires Kiev to implement vast reforms to meet the EU high economic, political and technical standards in exchange for market access.