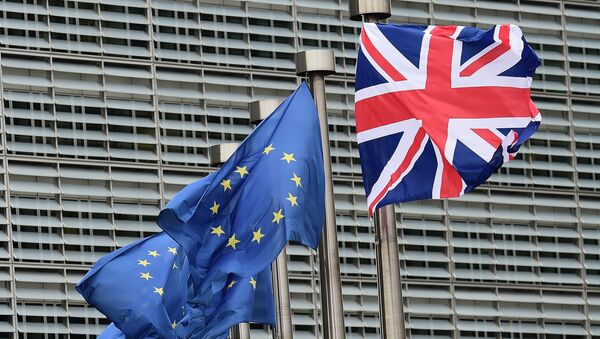 Jayne Adye, Campaign Director of the Get Britain Out euroskeptic cross-party group, said that Brussels reaction on referendum results should leave the great British public with a simple choice - whether to be a member of a United States of Europe or to be an independent, "sovereign nation once again."

Juncker 'Saddened' by Outcome of Dutch Referendum on EU-Ukraine Deal
MOSCOW (Sputnik), Alexander Mosesov — The reaction of Brussels to the results of the recent advisory referendum on the EU-Ukraine association deal ratification heats up anti-EU sentiment in the United Kingdom ahead of the June vote on the country's membership of the bloc, Jayne Adye, Campaign Director of the Get Britain Out euroskeptic cross-party group, told Sputnik on Thursday.

Earlier in the day, European Commission Chief spokesperson Margaritis Schinas said European Commission President Jean-Claude Juncker is "saddenned" by the outcome of the Dutch referendum that, according to preliminary results, saw 61.1 percent of Dutch voters rejecting the EU-Ukraine association deal’s ratification. A turnout of 32.2 percent passed the 30-percent threshold to give the public vote legal weight.

"This [Brussels reaction on referendum results] should leave the great British public with a simple choice — whether we want to be a member of a United States of Europe or if we wish to be an independent, sovereign nation once again. We feel it is best to Get Britain Out of the EU," Adye said.

Too Early to Say If Dutch Vote to Lead to EU-Ukraine Deal Review
UK nationals are set to vote on June 23 in a referendum on the country's EU membership, after Prime Minister David Cameron and the leaders of the 27 European Union member states reached a deal in February to grant the United Kingdom a special status within the bloc.

In 2014, Kiev and Brussels signed an agreement aimed at Ukraine's political association and economic integration into the bloc. The Netherlands is the only member state yet to ratify the agreement, which requires Kiev to implement vast reforms to meet the EU high economic, political and technical standards in exchange for market access.