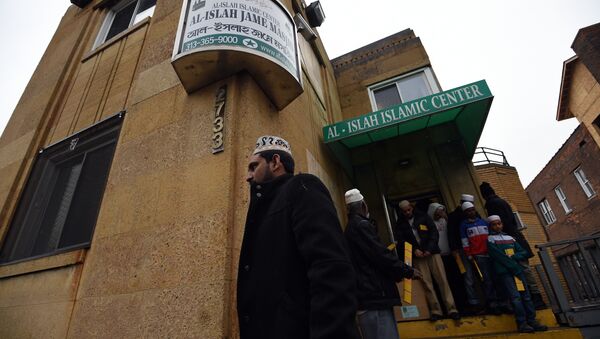 © AFP 2021 / JEWEL SAMAD
Subscribe
An unprecedented lawsuit has been filed by a group of American Muslims in Michigan, challenging the so-called FBI terrorist watchlist. Lena Masri, attorney with the Council on American–Islamic Relations, joins Brian Becker on Radio Sputnik’s Loud & Clear to illuminate some of the challenges to US citizens who adhere to the Muslim faith.

US Homeland Security Department Denies Targeting Muslim Communities
The lawsuit claims that the list is unconstitutional, and a violation of the civil rights of Muslims in America. The lead plaintiff is a four-year-old boy, placed on the watchlist when he was aged seven months. The parents were not notified, and discovered this fact only when they were entering the country at the Detroit airport.

According to Masri, "thousands upon thousands of Muslims across the country… have been wrongfully smeared and designated as known or suspected terrorists, without any type of due process. None of these people have been charged with a crime."

"Many of them have their bank accounts shut down, many cannot conduct wire transfers, and one of them has been actually tortured as the result of information-sharing with a foreign government," she detailed. Asked to expand on the innocent torture victim, she said that the Kuwaiti government had tortured the man, claiming he was a terrorist.

Asked how many American Muslims are on the watchlist, Masri pointed out that the numbers are kept secret. The last known statistic was about 1.5 million people, she said, noting that "[the lawsuit] represents only the American people who might be thousands upon thousands."

Discussing the child on the watchlist, Masri said: "He's our lead plaintiff. We dubbed him "Baby Doe;" he really highlights the recklessness that the federal government goes through in designating people as known or suspected terrorists."

"The baby was 7 months old when he was designated a terrorist. And he was treated as a terrorist in the airport: he has been subjected to extensive searches and pat downs and chemical testing and they even went through every single item in his mother's baby bag, including any single diaper. How does it make our country any safer?"

Masri observed, regarding the most common criteria for watchlisting an American of the Muslim faith, "We do believe that the main reason for adding to the watchlist has to do with the religious faith. As far as we know, the vast majority of people on the watchlist are the American Muslims."

"We've seen instances," she went on, "when, as a result of discrimination, certain people were scapegoated in order for us all to feel better as a country."

"We're seeking a major overhaul of the watchlist;" Masri explained, adding, "we want to make sure that the due process rights of any individual who's added on the watchlist are maintained, that people are notified, that they have an opportunity to contest their designation."

"I'd like to emphasize," she said, "that we are representing the innocent that have been designated. And for those individuals, they absolutely have right for due process, just as any other American does."