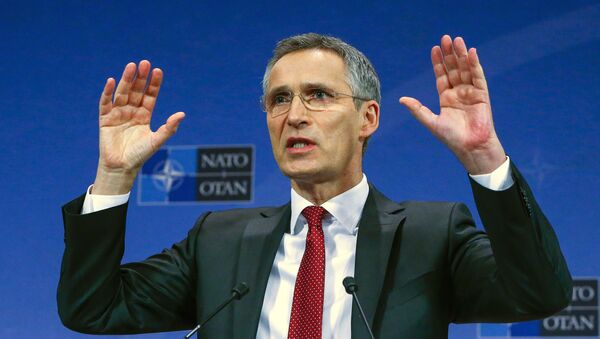 "NATO is not seeking confrontation with Russia. We will avoid a new Cold War," Stoltenberg stated. "Actually, we are striving for more cooperative and constructive relationship with Russia."

Stoltenberg also noted that the NATO-Russia Council has never been discontinued amid tensions over the Ukrainian conflict as the alliance and Moscow maintained a political dialogue.

“The NATO-Russia Council has never been suspended. Actually we had two meeting in the council after the annexation of Crimea. So the whole idea is that practical cooperation has been suspended, political dialogue has been in place,” Stoltenberg said.

Stoltenberg also stressed that the Turkish downing of the Russian Su-24 jet last November highlights the importance of keeping military dialogue open between NATO and Russia.

"The downing of the Russian plane over Turkey just underlines how important it is that we do our utmost to have military-to-military communications, transparency, predictability, to avoid [those] kinds of incidents," Stoltenberg stated.

The Secretary General emphasized that it is in NATO’s interest to talk to Russia on issues, "especially risk reduction… related to military activity."

000000
Popular comments
"we will avoid a new cold war"...yeah right, just move on directly to a hot war. The morons have gotten in over their (diminutive) heads.
michael
7 April 2016, 00:39 GMT3
000000
"Actually, we are striving for more cooperative and constructive relationship with Russia" BS, just like when NATO claims putting nukes right on Russian border is not being aggressive, and that NATO is not encroaching on Russia...forget about it. NATO lies...again. When they pull out all of their weapons and back off, THEN they can make such a claim.