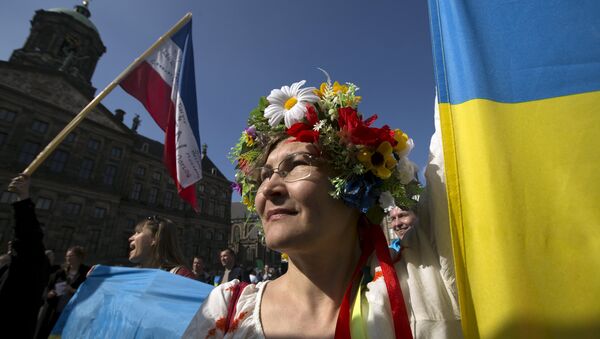 Residents of the Netherlands have mixed attitudes towards the April 6 referendum being held on the EU-Ukraine Association Agreement, according to RIA Novosti.

Grapes of Wrath: Referendum on Ukraine ‘Puts EU Future on the Line’
It seems that Kiev has failed to win over the Dutch with its pre-referendum campaign in the Netherlands, and the country's residents await the event with mingled feelings, RIA Novosti reported.

On April 6, voters in the Netherlands are scheduled to back or reject the EU-Ukraine Association Agreement. A turnout of 30 percent is required for the result to be accepted by the government.

Polls have opened in keenly-watched Dutch referendum on EU pact with #Ukraine, seen as a proxy poll on ties with EU @MBrulard @AFPJanHennop

Ukrainian Foreign Minister Pavel Klimkin was at the helm of his country's delegation in Amsterdam, where he rather awkwardly tried to promote the upcoming referendum late last week, RIA Novosti said.

Many users were quick to single out the top Ukrainian diplomat's efforts to entice the Dutch to back his country in the referendum.

"Klimkin and the Ukrainian delegation in the Netherlands," according to this tweet.

Another tweet said about "Klimkin riding a bicycle across Amsterdam in support of Ukraine."

In a separate development, in the run-up to the referendum, footage emerged on the Internet showing a spate of melees that have taken place in the Ukrainian parliament, the Verkhovna Rada, in the past. The video immediately became viral, with more than 200,000 viewers.

Meanwhile, reports about hefty sums allocated for the pre-referendum campaign have once again confirmed that concrete political efforts are being made to promote the campaign.

A total of two million euros were earmarked from the budget amid attempts by George Soros to support pro-Ukrainian activists. He has allocated a whopping 700,000 dollars for the purpose, according to media reports.

…the referendum on the Ukraine–EU Association Agreement is scheduled for April 6. The mixed signals, the reversals of opinion…

The Netherlands is the only EU country that has not yet ratified the association deal. The government decided to hold a referendum after more than 400,000 people signed a petition calling for a popular vote on the agreement.

The latest opinion polls indicate that more than half of Dutch voters lean toward voting against the agreement.