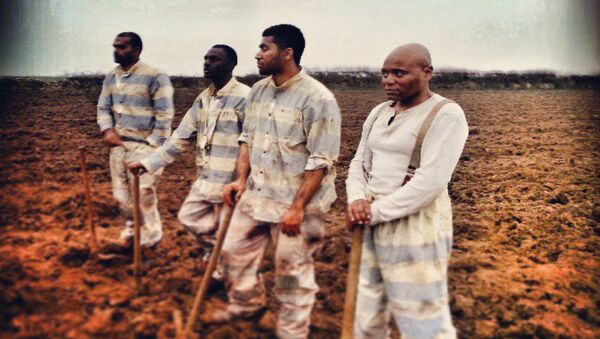 CC BY 2.0 / rufai ajala /
Subscribe
Additional protests in other states with a larger call to action for inmates to protest prison abuses starting in September.

On Monday, prison inmates around the United States called for a series of strikes against forced labor, broken parole systems, abusive prison policies, and solitary confinement, along with calls for better health care and generally more humane living conditions.

In Texas alone, inmates at five major prisons refused to leave their cells Monday with a letter circulating among the prisons listing a series of grievances ranging from an end to the financially-ruinous $100 medical co-pays to a call for the state to drastically downsize the state’s incarcerated population.

"Texas’s prisoners are the slaves of today, and that slavery affects our society economically, morally and politically," stated the five-page letter announcing the strike. "Beginning on April 4, 2016, all inmates around Texas will stop all labor in order to get the attention from politicians and Texas’s community alike."

The Texas strikes are part of a larger effort by a group, Support Prisoner Resistance, that is organizing planned protests and calling on every prisoner in every state and federal institution across America to "stop being a slave."

The group plans a larger nationwide coordinated action beginning September 9th to "shut down prisons across the country." The group says that if prisoners do not perform their jobs, correctional facilities will not be able to function.

Although many scoff at the group’s likening of prisoners to slaves, the reality is that local companies often rely on inmate labor that, all too often, comes with little or no pay. The Constitution of the United States does not prohibit slavery among prisoners. The 13th Amendment of the Constitution that abolished slavery states, "neither slavery nor involuntary servitude, except as a punishment for crime whereof the party shall have been duly convicted, shall exist within the United States."

Those claims are echoed by Erica Gammill, director of the Prison Justice League, an organization that works with inmates in 109 Texas prisons. "They get paid nothing, zero; it is essentially forced labor and they rationalize not paying prison laborers by saying that the money goes toward room and board to offset the cost of incarcerating them."

Judith Greene, a criminal justice policy analyst, echoed Gammill’s concerns. "If you’ve ever seen pictures of prisoners in Texas working in the fields, it looks like what it is," Greene said. "It’s a plantation: The prisoners are all dressed in white, they got their backs bent over whatever crop they’re tending and the guards are on horseback with rifles."

The Support Prisoner Resistance organization hopes to not only shed light on the similarities between the current American prison system and slavery, but also hopes that protests in Texas and nationwide will raise awareness of abuses within the US criminal justice system and the systematic stripping of constitutional rights from those who are incarcerated.

The US has by far the world’s largest incarcerated population, at some 2.2 million persons. The country has seen an astounding 500% increase in the prison population over the past thirty years, leading to facility overcrowding and an ever-growing burden on state budgets.

Sanders Becomes Google’s Most Searched Candidate Ahead of Wisconsin Primary

Another activist group, The Sentencing Project, notes that the racial disparity among the prison population is glaring. "More than 60 percent of the prison population is comprised of racial and ethnic minorities. For black males in their thirties, 1 in every 10 is in prison or jail on any given day." The Sentencing Project blames the "War on Drugs" for its disproportionate impact on America’s incarceration boom.

000000
Popular comments
U.S criticized China on no end for PRISON SLAVERY. And now what? Wait until RT or Sputnik gets it's sights on female prisoner's. They C-X slaves. They get naked with males seeing them. And bending for , search. They known to take pictures and sell them. I notice Russian news sites that have programs are getting many ex main stream media hosts at the shows. With often interesting shows.
cast235
6 April 2016, 03:47 GMT
000000
The 13th Amendment of the Constitution that abolished slavery states, "neither slavery nor involuntary servitude, except as a punishment for crime whereof the party shall have been duly convicted, shall exist within the United States." Jim Crow's daddy himself must have written that piece of crap.
dvdgrg09
6 April 2016, 04:05 GMT
000000
Newsfeed
0
New firstOld first
loader
LIVE
Заголовок открываемого материала
Access to the chat has been blocked for violating the rules . You will be able to participate again through:∞. If you do not agree with the blocking, please use the feedback form
The discussion is closed. You can participate in the discussion within 24 hours after the publication of the article.
To participate in the discussion
log in or register
loader
Chats
Заголовок открываемого материала
Worldwide
InternationalEnglishEnglishMundoEspañolSpanish
Europe
DeutschlandDeutschGermanFranceFrançaisFrenchΕλλάδαΕλληνικάGreekItaliaItalianoItalianČeská republikaČeštinaCzechPolskaPolskiPolishСрбиjаСрпскиSerbianLatvijaLatviešuLatvianLietuvaLietuviųLithuanianMoldovaMoldoveneascăMoldavianБеларусьБеларускiBelarusian
Transcaucasia
ԱրմենիաՀայերենArmenianАҧсныАҧсышәалаAbkhazХуссар ИрыстонИронауОssetianსაქართველოქართულიGeorgianAzərbaycanАzərbaycancaAzerbaijani
Middle East
Sputnik عربيArabicArabicTürkiyeTürkçeTurkishSputnik ایرانPersianPersianSputnik افغانستانDariDari
Central Asia
ҚазақстанҚазақ тіліKazakhКыргызстанКыргызчаKyrgyzOʻzbekistonЎзбекчаUzbekТоҷикистонТоҷикӣTajik
East & Southeast Asia
Việt NamTiếng ViệtVietnamese日本日本語Japanese中国中文Chinese
South America
BrasilPortuguêsPortuguese
NewsfeedBreaking
08:22 GMTTorch Lighting for Beijing 2022 Winter Olympic Games Held in Athens
08:18 GMTDenmark to Built World's Tallest, Most Powerful Wind Turbine
07:56 GMT'Mother of Cringe': Twitterwhirl After Greta Thunberg Strikes a Lighter Note at Climate Concert
07:55 GMTBitcoin Surpasses $62,000 First Time Since April
07:34 GMTTurkey Can Purchase Russia's Su-35, Su-57 Fighters If US Does Not Sell F-16, Official Says
07:22 GMT'Like a 150-Year-Old Museum': Sweden Finds Well-Preserved 19th-Century Cargo Ship
07:13 GMTChina's GDP For First Three Quarters of 2021 Grew 9.8% Year-on-Year
06:53 GMTDenmark Says Non-Western Immigration Cost State Nearly $5 Billion Per Year
06:51 GMTCurrent Energy Crisis Driven by Various Factors, Inter-Regional Competition for Gas, WEC Says
05:52 GMT'He Was Unlucky': David Amess Was Killed 'at Random', Report Says
05:41 GMTMassive Fire Reported at Oil Refinery in Kuwait, Causing Several Injuries
05:16 GMTWhereabouts of American Missionaries Kidnapped in Haiti Remain Unknown, Reports Say
04:24 GMTStudent Opens Fire at School Near Russian City of Perm
03:48 GMTRobert E. Lee Statue Removed From Dallas Emerges at Private Texas Resort - Report
03:17 GMTItalian Police Capture Hundreds of Dead Dormice Intended as Dinner for Mafia - Report
02:30 GMTItalian Fans Sending Love to Johnny Depp Prove Actor Is Still Adored Outside US
01:55 GMTOne Dead in Second Grambling State University Shooting This Week, School Says Operating as Normal
01:10 GMTBiden, First Lady Spotted Maskless at Italian Restaurant in DC
01:06 GMTGodsent: US Senator Praises the Lord for Bitcoin After Lawmakers Approve Debt Ceiling Raise
00:36 GMTMajor Evacuation Flight Departs Kabul For Qatar With Over 350 People on Board - Reports