Trash to Treasure: How One Greek Island Is Recycling Refugees' Life Vests 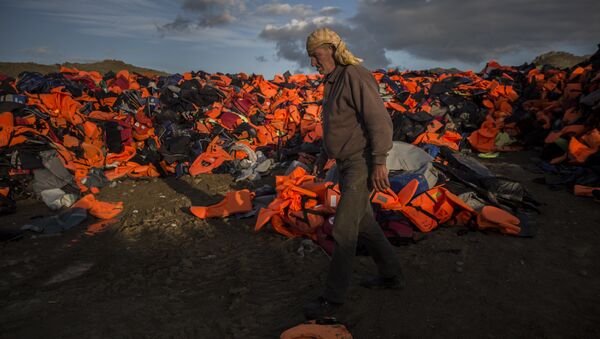 © AP Photo / Santi Palacios
Subscribe
With fears the migration crisis may cause widespread environmental damage along many of Europe's migrant routes, authorities from one Greek island have told Sputnik how they are literally turning one man's trash into another man's treasure by recycling life vests dumped along the island's shores.

The island of Chios, one of the main stops for refugees and migrants traveling from Turkey to Greece, has been at the forefront of the migration crisis with more than 180,000 people estimated to have passed through the island over the past year.

Moments from the transport of the refugee waste from Chios! Makers Unite

While initial concerns surrounded the island's resources and its ability to house new arrivals, fears increasingly turned towards Chios' environment, with huge amounts of life vests dumped along the island's pristine coastline.

Sokrates Syriodis, Chios councilor and President of the island's waste management authority, estimated that there was "roughly 4,000 or 5,000 tons" of extra waste left behind on the island as a result of the migration crisis.

As locals struggled to deal with the increase in waste, authorities in Chios devised a plan to try and make use of the life vests behind left behind, by recycling the material to make other useful products.

Instead of disposing of the life vests in the same manner that the island does with other forms of rubbish, authorities looked to utilize the leftover materials and reuse them.

"We have a lot of life vests left behind. We're taking these life vests and transporting them to a waste field," Syriodis said.

"But we don't bury them, we keep them there in order to see what will happen."

While initially struggling to attract support from businesses over the idea, Syriodis said the island was working with Greek NGO Odyssea to help with their recycling efforts.

"They [Odyssea] are taking the life vests away to a process center in Athens and they are taking this material and transforming it into useful products," he said, with the material to be used for items such as furniture and clothing.

Along with avoiding an "ecological bomb" on the island, Syriodis told Sputnik the plan was also set to boost the Greek economy.

"These products are hopefully going to be sold all around the world."

000000
Popular comments
The story is so sad. It paints the total destruction of the country as a business opportunity. But it is so degrading for a glorious nation that has laid the foundations of the European civilization. A nation that has sacrificed millions of lives to protect itself from the Eastern threat for thousands of years, and now they are just picking up the trash of its invaders... One cannot go lower than that.
Athanasios
6 April 2016, 15:57 GMT
000000
Newsfeed
0
New firstOld first
loader
LIVE
Заголовок открываемого материала
Access to the chat has been blocked for violating the rules . You will be able to participate again through:∞. If you do not agree with the blocking, please use the feedback form
The discussion is closed. You can participate in the discussion within 24 hours after the publication of the article.
To participate in the discussion
log in or register
loader
Chats
Заголовок открываемого материала
Worldwide
InternationalEnglishEnglishMundoEspañolSpanish
Europe
DeutschlandDeutschGermanFranceFrançaisFrenchΕλλάδαΕλληνικάGreekItaliaItalianoItalianČeská republikaČeštinaCzechPolskaPolskiPolishСрбиjаСрпскиSerbianLatvijaLatviešuLatvianLietuvaLietuviųLithuanianMoldovaMoldoveneascăMoldavianБеларусьБеларускiBelarusian
Transcaucasia
ԱրմենիաՀայերենArmenianАҧсныАҧсышәалаAbkhazХуссар ИрыстонИронауОssetianსაქართველოქართულიGeorgianAzərbaycanАzərbaycancaAzerbaijani
Middle East
Sputnik عربيArabicArabicTürkiyeTürkçeTurkishSputnik ایرانPersianPersianSputnik افغانستانDariDari
Central Asia
ҚазақстанҚазақ тіліKazakhКыргызстанКыргызчаKyrgyzOʻzbekistonЎзбекчаUzbekТоҷикистонТоҷикӣTajik
East & Southeast Asia
Việt NamTiếng ViệtVietnamese日本日本語Japanese中国中文Chinese
South America
BrasilPortuguêsPortuguese
NewsfeedBreaking
11:38 GMTThe Original Takes It All: ABBA Sues UK Cover Band Over Trademark Infringement, Media Says
11:33 GMTBrazil's Supreme Court Opens Probe Into Bolsonaro's Unverified Claims About COVID Jabs' Side-Effect
11:18 GMTMass Demonstration Against COVID Restrictions Held in Utrecht
11:16 GMTTwitter Erupts as New Zealand's Ajaz Patel Scripts History by Bagging All 10 Wickets Against India
11:04 GMTCOVID Sceptics Hold Rally Against Vaccine Mandate in Vienna
11:00 GMTMaxwell Trial: Massage Table 'Used' by Epstein 'to Abuse Victims' Brought Into Courtroom
10:58 GMTMedia Reveals Reason Why Employees Are Leaving VP Kamala Harris' Office
10:43 GMTWatch People Fleeing Clouds of Smoke and Ash as Semeru Volcano Erupts in Indonesia
10:31 GMTTwo Hippos at Belgian Zoo Contract COVID-19
10:20 GMTUS Special Envoy Welcomes Taliban Decree Expanding Women's Rights in Afghanistan
10:15 GMTWHO Inspection of Sputnik V Vaccine to Take Place After January 2022
08:41 GMTI Ain't the Sharpest Tool in the Shed: MGK Stabbed Himself While Trying to Impress Meghan Fox
07:54 GMTCristiano Ronaldo May Miss Manchester United's First Game Under New Boss Ralf Rangnick
07:40 GMTUK Government Reportedly Considering Criminalising Public Sexual Harassment of Women
07:34 GMTParents of Suspected Michigan Shooter Detained in Detroit
07:24 GMTUK Gov't Reportedly Considers Changing Law on Free Speech After Meghan Markle's Victory Against ANL
07:22 GMTFrench Foreign Ministry Says Evacuated Over 300 People From Afghanistan
07:13 GMTNuclear Deal Talks With Iran in Vienna to Resume Next Week, Russian Envoy Says
06:06 GMTCOVID Live Updates: Mexico Confirms Its First Case of Omicron Variant
06:02 GMT'Johnson's Not Above the Law': Labour Asks Police to Probe Alleged No 10 Parties Amid 2020 Lockdown