Grapes of Wrath: Referendum on Ukraine ‘Puts EU Future on the Line’ 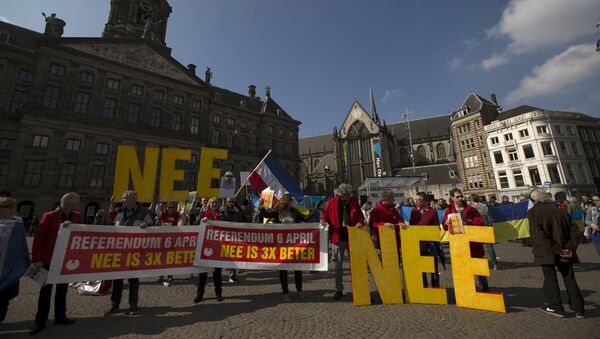 The Dutch referendum on the EU association agreement with Ukraine is fraught with serious repercussions as EU member states are getting increasingly jittery about decisions made in Brussels, Deutschlandfunk wrote on Tuesday.

The Dutch Are to Oppose EU-Ukraine Association Treaty in Referendum
Europe’s current rapprochement with Kiev has laid bare a host of sore points with many in the EU fearing that free trade with Ukraine would speed up the country’s admission to the 28-nation bloc, inundate Europe with cheap labor and send taxes up.

This sentiment is particularly evident in the countries, which were initially wary of the very idea of European integration.

Widespread disillusionment with the migration policy pursued by Brussels and the general sense of instability is adding strength to the Euro-skeptics and the upcoming vote gives them a good chance opportunity to speak out, Deutschlandfunk emphasized.

The organizers of an ongoing campaign to collect signatures against the EU-Ukraine association agreement make no secret of their wish to eventually make the Netherlands independent from Brussels.

“Our long-term goal is to have a referendum where the Dutch, just like the British, will be able to decide on their country’s EU membership. We need to stand up for our democratic rights,” Arjan van Dirkshorn, a historian and one of the campaign’s organizers, said.

Even though the outcome of Wednesday’s referendum is not clear, the very fact that it will take place, means that opposition to decisions made in Brussels keeps growing all the time,” Deutschlandfunk wrote in conclusion.