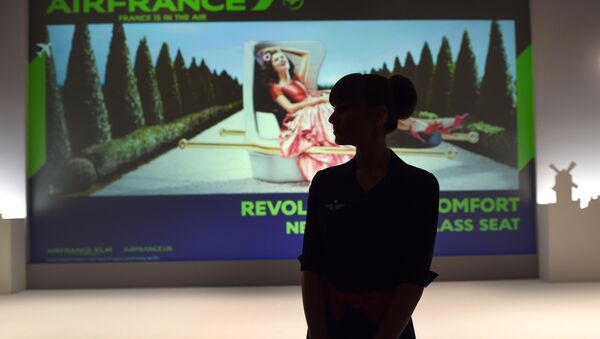 © AFP 2021 / TIMOTHY A. CLARY
Subscribe
Flight attendants that do not accept Iranian dress code on the Air France flight Paris-Tehran will be exempted from flying on that particular route.

As flights are due to resume on 17 April, flight attendants who refuse to wear a headscarf will be assigned to other routes.

Wearing Hijab Contributes to 'Passive Terrorism' - US Research Organization
On the eve of the resumption of flights on the route Paris-Tehran, Air France published a memo that instructed stewardess that “during the flight they must be in trousers and loose jacket and when they step outside they should cover their hair and head with a scarf.”

The Air France requirements caused a protest amongst the company’s flight attendants, because management agreed to the proposal of trade unions for voluntary compliance to maintain the dress code.

“When flight attendant or pilot will be assigned to a flight to Tehran, Air France will give them the opportunity to refuse and to change their flight. All employees must inform about their refusal to wear a headscarf beforehand,” the airline spokesperson was quoted by Reuters as saying.

But to get an idea as to how this decision was handled in Iran, Sputnik spoke to expert Emad Abshenass.

“This rule has no exceptions for anyone. It is therefore understandable why these requirements are put forward and to its staff, in this case — the stewardess. Even high-ranking foreign officials like for example, the distinguished Prime Minister of Australia. When she stayed on an official visit to Iran, she dressed in appropriate clothing — in a hijab. All foreign high-ranking persons, female representatives of foreign states must respect the laws of the country to where they have come — to Iran.”

Abshenass further said that there is no need for women to cover their faces in Iran. Hence, complying with this manner of clothing should not create such a big problem for foreign women in Iran.

000000
Popular comments
It's not asking too much to comply with international customs on international flights. As Abshenass stated, the requested dress code is quite modest. Pants and a scarf. If they don't want to go to Iran, they aren't forced to do it.
jas
5 April 2016, 18:37 GMT1
000000
When you come to Angola all attendants including moslems have to wear Christian accessories such as cross necklace just to be fair
aru_t
5 April 2016, 18:50 GMT
000000
Newsfeed
0
New firstOld first
loader
LIVE
Заголовок открываемого материала
Access to the chat has been blocked for violating the rules . You will be able to participate again through:∞. If you do not agree with the blocking, please use the feedback form
The discussion is closed. You can participate in the discussion within 24 hours after the publication of the article.
To participate in the discussion
log in or register
loader
Chats
Заголовок открываемого материала
Worldwide
InternationalEnglishEnglishMundoEspañolSpanish
Europe
DeutschlandDeutschGermanFranceFrançaisFrenchΕλλάδαΕλληνικάGreekItaliaItalianoItalianČeská republikaČeštinaCzechPolskaPolskiPolishСрбиjаСрпскиSerbianLatvijaLatviešuLatvianLietuvaLietuviųLithuanianMoldovaMoldoveneascăMoldavianБеларусьБеларускiBelarusian
Transcaucasia
ԱրմենիաՀայերենArmenianАҧсныАҧсышәалаAbkhazХуссар ИрыстонИронауОssetianსაქართველოქართულიGeorgianAzərbaycanАzərbaycancaAzerbaijani
Middle East
Sputnik عربيArabicArabicTürkiyeTürkçeTurkishSputnik ایرانPersianPersianSputnik افغانستانDariDari
Central Asia
ҚазақстанҚазақ тіліKazakhКыргызстанКыргызчаKyrgyzOʻzbekistonЎзбекчаUzbekТоҷикистонТоҷикӣTajik
East & Southeast Asia
Việt NamTiếng ViệtVietnamese日本日本語Japanese中国中文Chinese
South America
BrasilPortuguêsPortuguese
NewsfeedBreaking
14:36 GMTUS May ‘Pause’ Lethal Aid to Ukraine to Reduce ‘Risk of Confrontation With Moscow’
14:32 GMTFrench Anti-Fascists Hold Demonstration in Paris
14:12 GMTGrounded: Macron Tells UK to 'Get Serious' If It Wants to Discuss, Resolve Illegal Immigration Issue
13:49 GMTHealth Agency: New COVID Strain Poses 'High to Very High Risk' to Europe
13:42 GMTMassive Asteroid Stronger Than a Nuclear Bomb Will Swoosh Past Earth in Late December, Report Says
13:28 GMTIndian Farmers Postpone Tractor March to Parliament But Protest to Continue Until Their Demands Met
13:11 GMTUK May Expand Red Travel List as Labour Wants Gov't 'to Bolster Defences' Due to New COVID Strain
12:23 GMTChina Reportedly Slams Double Standards Ahead of Iran Deal Talks Over Nuclear Handoff to Australia
12:07 GMTNBA Superstar LeBron James Fined $15,000 for Obscene Gesture
12:03 GMTPoking the Bear, US Warns Russia All Options on Table
11:49 GMTSolomon Islands Opposition Plans No-Confidence Vote Against Prime Minister, Reports Say
11:38 GMTOmicron: Indian Politicians Urge PM Modi to Ban Flights From Affected Countries Amid COVID Scare
11:27 GMTLive Updates: Two Cases of Omicron Strain Detected in UK
10:47 GMTUS Backs Restoration of Peace in Solomon Islands After PM Accuses Foreign Powers of Fuelling Unrest
10:40 GMTBoJo to Unveil Crackdown on Crime to Return to 'Bread-and-Butter Politics' Amid 'Sleaze' Row: Report
10:34 GMTAlex Ovechkin Sets Yet Another Record, Inching Closer to Becoming NHL's All-Time Scorer
10:25 GMTSouth African Medical Association Says Omicron Variant Causes 'Mild Disease'
08:45 GMTJapanese PM Kishida: Tokyo Eyeing Enemy Base Strike Capability Amid China and NK's Military Buildup
08:34 GMTBiden's Re-Election Bid: Should US Politicians & Justices of Advanced Age Undergo Cognitive Tests?
08:21 GMTAt Least Two Killed in UK as Storm Arwen Pounds Parts of Country