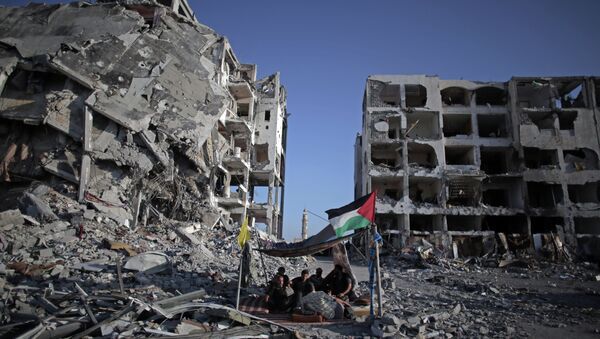 A Hamas official dismissed Israeli accusations that it was stealing cement consigned for reconstruction in Gaza in the aftermath of a 2014 war, and slammed a newly-imposed ban by Israel on private shipments of cement to the enclave, saying it will lead to a social “explosion.”

'We Didn't Get What We Expected': Israel Extends Fishing Zone for Gazans
On Monday Israel charged Imad al-Baz, Gaza’s deputy director of the economy ministry and a Hamas member, with appropriating materials intended to be used for civil reconstruction in the area, and stopped private importers from shipping cement to Gaza.

Baz rebuffed the accusations, claiming that all cement deliveries to the enclave were in compliance with the Gaza Reconstruction Mechanism designed by the United Nations.

"We don't interfere with the cement mechanism," he said, specifying that the theft of construction materials was unlikely, due to a round-the-clock monitoring program by Israel.

No Warning: Israel Cuts Power to Major Palestinian Cities Over Unpaid Debt
A UN coordinator for the Palestinian territories, Robert Piper, said there were no grounds for laying charges on Baz.

Piper expressed hope that the issue would be resolved quickly, adding that ban hasn’t affected imports from Qatar and the UN.

However, Baz said that the restriction does slow the reconstruction process, and would eventually result in the growth of unemployment, affecting tens of thousands of citizens across Gaza, a region considered to be one of the world’s poorest.

"If Israel continues to prevent the supply of cement to Gaza, the situation will explode in the face of the occupation and it will bear the responsibility."

Israeli Army Medic Called a Hero for Executing Wounded Unarmed Palestinian
The UN reconstruction mechanism was set up following a destructive war between Israel and Palestinian militants in 2014. According to officials, about 240 tons of cement is shipped to the strip weekly.

Israeli authorities have been anxious that Hamas would use construction materials to repair the tunnels destroyed in the war — subterranean routes that could be used for attacks against the Jewish state.