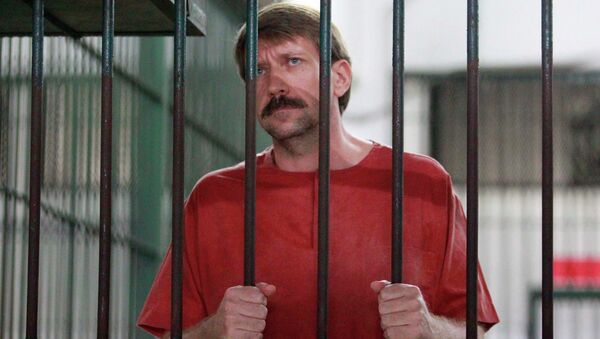 © Sputnik
Subscribe
Moscow considers it possible to transfer Russian nationals Viktor Bout and Konstantin Yaroshenko from the United States to their home country under the Council of Europe's Convention on the Transfer of Sentenced Persons, Russian Deputy Foreign Minister Sergei Ryabkov said.

MOSCOW (Sputnik) — Last week, media reports emerged regarding confidential talks on the swap of Ukrainian national Nadezhda Savchenko, sentenced to 22 years in prison for directing artillery that killed two Russian journalists, for the Russian nationals imprisoned in the United States, including alleged arms dealer Bout and pilot Yaroshenko. According to US Embassy in Moscow spokesman William Stevens, the White House is not considering such an option.

"We see, surely, that Russian citizens Bout and Yaroshenko continue to remain in a very difficult situation after being sentenced to long prison terms under a very, very questionable pretext used by the prosecution against them. We've been insisting on the necessity to free these Russian nationals for a long time," Ryabkov told RIA Novosti.

'Am I Not a Human?' Jailed Pilot Yaroshenko Exposes US Lies and Torture
According to the deputy foreign minister, the Russian nationals could be transferred to their homeland under the Council of Europe Convention on the Transfer of Sentenced Persons, which envisions a possibility for foreigners convicted of criminal offenses to serve their sentences in their own countries.

"The United States has joined the convention despite not being part of the Council of Europe. There are certain Council of Europe conventions that allow countries that are not members of the organization to join. Under this convention the transfer of Yaroshenko and Bout to Russia, in our opinion, is very much possible," Ryabkov said.