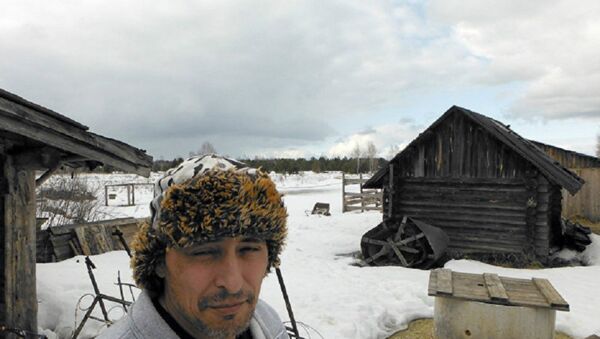 © Sputnik / Igor Yermachenkov
Subscribe
Justin Irwin, a Native American living in a small village in Central Russia, raises cows, hens and pigs and plans to expand and set up a full-scale animal farm.

“A man makes his own arrows,” according to an old Indian proverb. It rings especially true in the case of Justin Irwin, a Lakota Indian who lives  deep in the woods of Central Russia.

A "true Communist,” he once left a reservation in South Dakota to begin a new life in Slavtsevo, a village located in the very heart of Vladimir Region with his Moscow-born Russian wife and their three kids.

Justin abhors reservations just like he does big cities.

“The only reason why I will ever go to Moscow will be to attend  the opening of a memorial to the victims of the genocide of Indians and say a few words about it,” Justin told RIA Novosti.

He also wants to obtain Russian citizenship and rebuild their old house.

New Beginning: Life of Syrian Refugees in Russia After Fleeing Aleppo
Justin met his future wife, Natalya, on the Internet in 2009. Interest in Native American culture sparked a friendship between the two on an online forum.

Drawn together by their shared dislike of big cities and a desire to set up a prosperous farm, they eventually started looking for a house in a village in the Russian outback to settle down and start a new life.

For Natalya, a single mom at the time, the adventure led to love, marriage and a second child.

When asked how come they decided to live in Russia and not to move Stateside, Justin said: “The United States? This is what they call it, but we call it Turtle Island. They killed off all the bison, they destroyed the nature. I don’t want my kids to live in a reservation. I want to raise them here in Russia. Living in America is like being inside a concrete trap. The system the white people built there is not for us,” he said.

Irwin said he likes genuine Communism. Not Marxism, but the original Communism derived from “commune,” “community.”

“This is how we once used to live, working together as part of large communities,” he added.

Big Wolf also traces his roots to the matriarchate where men, hunters and warriors, did nothing without the advice and consent of the ruling council of their mothers and grandmothers.

He said that people in Russia have everything they need to develop without capitalism and the system created by the “whites.”

“The genocide in America still goes on and it never stopped, that’s why they will never have a memorial to the Indian genocide there.

He described the ongoing wars in Syria and elsewhere in the Middle East as a continuation of the genocide that once happened in North and South America.

“Take a look at Africa, the Middle East… Oil, money… Why is it so? We should have an agreement between Russia and Lakota Indians on cultural cooperation and exchanges,” Big Wolf said.

000000
Popular comments
"He said that people in Russia have everything they need to develop without capitalism and the system created by the “whites.” He is completely right. Maybe the only country on Earth that can say that. Maybe that is why the US has to try to destroy it. It's not just the resources or the land, it's also the people and the history.
dvdgrg09
4 April 2016, 19:04 GMT7
000000
The system the white people built there is not for us,” he said. -- If whites run "America" then who is pushing them out? Is AIPAC full of "whites"? Does the US Congress put "whites" first? If his statement is valid, I would think the answer to both of those question would be yes, which it isn't. i don't think it was necessary at all for him to bring racial hatred into the discussion, given that he's not in a "black" nation.
jas
4 April 2016, 19:17 GMT2
000000
Newsfeed
0
New firstOld first
loader
LIVE
Заголовок открываемого материала
Access to the chat has been blocked for violating the rules . You will be able to participate again through:∞. If you do not agree with the blocking, please use the feedback form
The discussion is closed. You can participate in the discussion within 24 hours after the publication of the article.
To participate in the discussion
log in or register
loader
Chats
Заголовок открываемого материала
Worldwide
InternationalEnglishEnglishMundoEspañolSpanish
Europe
DeutschlandDeutschGermanFranceFrançaisFrenchΕλλάδαΕλληνικάGreekItaliaItalianoItalianČeská republikaČeštinaCzechPolskaPolskiPolishСрбиjаСрпскиSerbianLatvijaLatviešuLatvianLietuvaLietuviųLithuanianMoldovaMoldoveneascăMoldavianБеларусьБеларускiBelarusian
Transcaucasia
ԱրմենիաՀայերենArmenianАҧсныАҧсышәалаAbkhazХуссар ИрыстонИронауОssetianსაქართველოქართულიGeorgianAzərbaycanАzərbaycancaAzerbaijani
Middle East
Sputnik عربيArabicArabicTürkiyeTürkçeTurkishSputnik ایرانPersianPersianSputnik افغانستانDariDari
Central Asia
ҚазақстанҚазақ тіліKazakhКыргызстанКыргызчаKyrgyzOʻzbekistonЎзбекчаUzbekТоҷикистонТоҷикӣTajik
East & Southeast Asia
Việt NamTiếng ViệtVietnamese日本日本語Japanese中国中文Chinese
South America
BrasilPortuguêsPortuguese
NewsfeedBreaking
06:20 GMT'75% of Conversations About Sex': Finnish Ministers Condemn Sexual Harassment Among First Responders
06:03 GMTSecond Day of Appeal Hearing on Julian Assange's Extradition
06:02 GMTDanish PM Faces Impeachment for Deleting Her Messages Related to Slaughter of 15 Mln Mink
05:37 GMTBritons Hit the Streets to Protests Against 'Spiking Epidemic' in UK Nightclubs - Photos
04:15 GMTParis Sends Warning to Two British Boats Fishing in French Waters as Post-Brexit Tensions Soar
03:55 GMTNASA Solves Problem of Urine Leaks in Toilet Aboard Inspiration4 Spacecraft
03:42 GMTNot a Unicorn! Take a Look at NASA's Newly Released Photo of Nebula That Resembles Godzilla
03:18 GMTCOVID-19 Cases Continue to Decline in Florida as Immunity Increases
03:04 GMTAin't Afraid of No Ghosts: Americans Willing to Live in 'Haunted' Houses For Discount, Survey Shows
02:29 GMTTexas AG Paxton Files Amicus Brief for Facebook's 'Vague and Inaccurate' Interpretation of Law
02:19 GMTDemocratic Governor Whitmer Faces Backlash For Once Again Violating COVID-19 Policies
01:53 GMTHackers Breach, Leak Personal Data of Israeli Defense Ministry Servicemembers, Emails of Benny Gantz
01:07 GMTChina Seeks Upgrade of ASEAN Relationship to Comprehensive Strategic Partnership at November Summit
00:50 GMT‘Don’t Mess With Your Grandmother’: Prince William Recalls Dispute With The Queen Over Wedding Look
00:19 GMTShiba Strong! Netizens Demand Robinhood to Declare Soaring Shiba Inu Coin Cryptocurrency
00:14 GMTBiden Admin. Bars Immigration Arrests at Schools, Hospitals, Places of Worship
YesterdayASEAN Urged to Recognize Myanmar’s Ousted National Unity Government After Snubbing Junta Chief
YesterdayHackers Breach US National Rifle Association, Threaten to Release Stolen Files - Reports
YesterdayFC Barcelona Fires Ronald Koeman as Club Coach
YesterdayBiden Admin. Dodges Standard Regulatory Rulemaking to Rush Vaccine Mandate