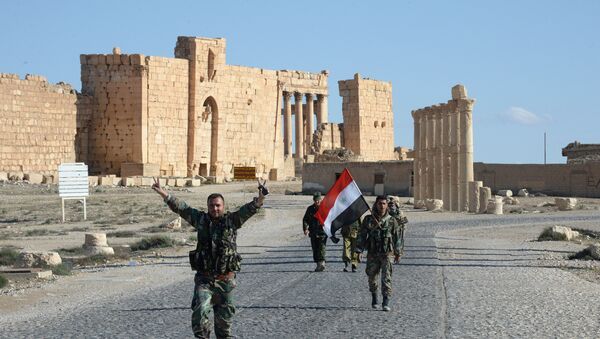 It is Russian President Vladimir Putin who should be thanked for the liberation of the ancient Syrian town of Palmyra, the French newspaper Le Figaro wrote.

"Russia made the liberation possible and became the winner in this symbolic battle," the article read.

"The absence of US and its allies among the winners proves their weakness. Putin’s lesson in strategy is simple: the ideology of extremism understands only one word – force," the author added.

According to the article, the Western approach to fight terrorism has proved useless. At the same time President Putin’s strategy "placed Syria above spineless and oblivious democracies."

Clever Trick: 'Putin's Stratagem Decided the Fate of Palmyra'
On March 27, the Syrian Army, supported by pro-government militia and the Russian Aerospace Forces, recaptured the historic city, which had been under Daesh control for about a year.

The jihadist group, which was condemned as a terrorist organization by Russia, the United States and other countries, shocked the world when it destroyed part of the ruins, which are a designated UNESCO World Heritage site.