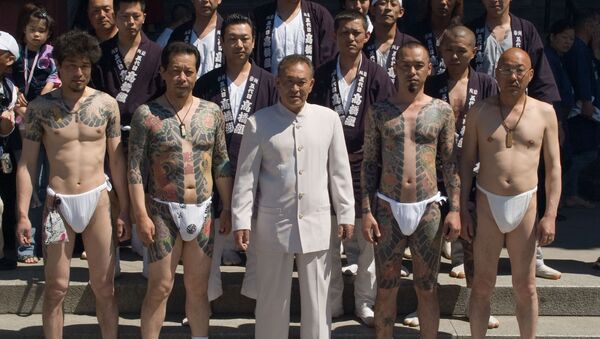 As Japan has become engulfed in mafia wars due to a notorious split within the country’s largest Yakuza groups, many fear the situation might soon get out of control. Sputnik spoke with former Yakuza member Keino Suzuki who explained what exactly is happening in the Yakuza world.

Japan Police Search Yakuza Headquarter
Japan is generally known as a wealthy country with one of the lowest crime rates in the world. It has been this way for a while, but some fear things might be changing for the worse.

As of late, almost every week Japan is shaken by high-profile crime news. All of this is happening because of an infamous split within the country's largest mafia groups and media warn about a possible upcoming war between Yakuza clans.

Last year, the Yamaguchi-Gumi crime syndicate split into two groups which was followed by a series of riots and clashes between Yakuza. Members who broke away from the main group created a new rival gang named the Kobe Yamaguchi-Gumi.

Fighting between the two groups has intensified across the country since February of this year. Japanese police tried to respond to the increased violence and arrested eight Yakuza members on March 28 alone.

Despite the fears of an even larger-scale Yakuza war which might affect the Japanese public and damage the country's international image, Suzuki, the man who knows the Japanese criminal scene inside and out, told Sputnik in an interview that a violent escalation isn't likely to happen.

According to Suzuki, contemporary mafia wars have become very different from what they used to be in the past after the government in recent years introduced very strict penalties for the use of both firearms and bladed-weapons.

"Penalties for the use of firearms have become very strict, that's why mafia leaders began asking their fighters not to use knives or firearms… the decisive factor here was the increased pressure from Japanese authorities, as for the use of lethal weapons one could face a life sentence," Suzuki told Spuntik.

Lawless London: Surge in Violent Crimes as Gangs Battle for Territory
Nowadays, Yakuza gangs need to save their troops as even for a small-scale confrontation several of their members could get arrested. If in the past, killers would get no more than 10 years in prison and upon release they would get a high-ranking position; now they could be facing at least 30 years behind the bars, which means a person's life is essentially over and that changed things dramatically, Suzuki said.

"So the bosses will be reluctant to get into a struggle," Mizoguchi told journalists during a press conference last year in Tokyo.

Despite harsh anti-Yakuza laws implemented by Japanese authorities, gangs will continue to fight each other, Suzuki told Sputnik.

"An intense struggle will continue, however one cannot call it a real war," Suzuki said.

Slowly but surely it looks like the once-powerful Yamaguchi-Gumi Yakuza gang is losing its influence. Following the split last year, the Yamaguchi-Gumi decreased from around 23,000 to 14,000 members. The introduction of the harsh anti-gang laws by authorities has also decreased the power of Japanese criminal groups.

Keino Suzuki became involved in the world of Yakuza at the age of 17. One day he was nearly killed and was forced to go on the run. It was then he decided to drastically change his life. He repented for his past crimes and converted to Christianity. After that he started an organization which aims to rehabilitate former criminals.