'We Didn't Get What We Expected': Israel Extends Fishing Zone for Gazans 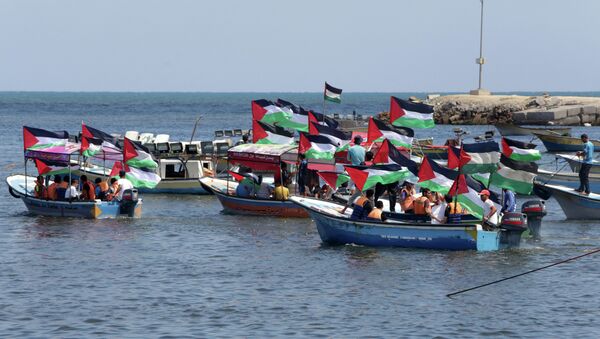 As Israel extended the width of the fishing zone for Palestinians off the Gaza Strip coast for the first time in a decade, many fishermen called the expansion inadequate, claiming it is not enough to increase the size of their catches.

Israel expanded the fishing areas for Gazans from six to nine nautical miles Sunday. The extension affected southern and central shores of the Gaza Strip, excluding the areas in the vicinity of the Israeli border.

Israeli Army Medic Called a Hero for Executing Wounded Unarmed Palestinian
The measure marks a stated attempt by Israeli authorities to support the economy of the Gaza Strip, a region plagued by poverty and soaring unemployment.

According to COGAT, the Israeli defense department arm responsible for implementing state policies in the Palestinian territories, the move will bring the equivalent of 400,000 shekels to the Gaza Strip economy.

Over 200 fishing vessels sailed out into the Mediterranean from the Gaza port on Sunday night, following the implementation of the law. Many of them were dissatisfied with their catches.

"I hoped with the new permission for a bumper catch," Raed Abu Ouda, local fisherman, told AFP. "But after 17 hours of work we didn't get what we expected."

Nizar Ayyash, chairman of Palestinian fishermen syndicate in Gaza, called the move by Israel insufficient, given that roughly 1.95 million people live in the area, including some 4,000 engaged in fishing business.

Under the Oslo peace agreement, the fishing area should be as wide as 20 nautical miles from the Gaza shoreline. Israeli authorities said restrictions are conditioned by the necessity to prevent attacks by the Hamas movement.

No Warning: Israel Cuts Power to Major Palestinian Cities Over Unpaid Debt
Israeli military routinely attack Gazan fishermen, suspected of crossing maritime borders, to prevent “security threats.” Many Palestinians are arrested and have their fishing equipment, including their boats, confiscated.

A naval blockade of the Gaza Strip was put in place in 2007, ostensibly to deter Palestinian militants fighting Israel. Since that time there have been three wars between the sides