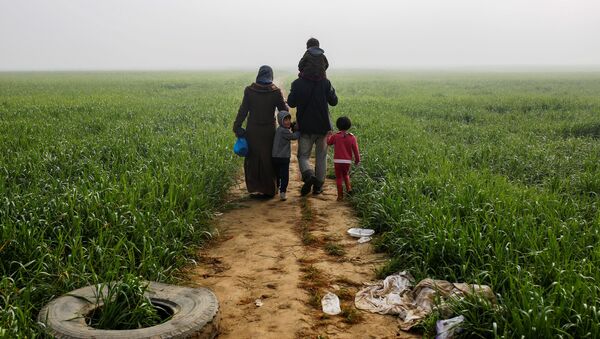 © REUTERS / Marko Djurica
Subscribe
With Greece returning the first refugees to Turkey under the new refugee deal between Brussels and Ankara, German Interior Minister Thomas de Maiziere has suggested that similar arrangements may be needed with North African countries to limit the flow of refugees and migrants into the EU.

As the implementation of the controversial EU-Turkey deal commences, de Maiziere warned that additional action might be necessary to avoid the widespread use of additional migrant transit routes for people looking to enter Europe.

'We Must Search for Solutions'

While expressing optimism over the recent deal with Ankara, the interior minister told the newspaper Tagesspiegel am Sonntag that "there are still some questions that we must answer," referring to concerns over a spike in Mediterranean people smuggling operations in North Africa.

"This includes the implementation of the negotiated agreement achieved with Turkey, but also a search for solutions in case of possible alternative routes, such as via Libya and Italy.

"If, once more, more people come via this route, we will need to search for similar solutions as we did with Turkey and also enter into negotiations with North African countries," de Maiziere said.

Just as in the EU-Turkey deal, de Maiziere suggested that some North African countries could receive aid for taking back any refugees and migrants that reach EU member states.

"I could imagine reception centers in North Africa for refugees who are returned from Italy, and in turn a humanitarian admission program with the North African country in question."

The German interior minister's suggestion is significant as it acknowledges that the Turkey-EU deal is not a complete solution for Europe's ongoing migrant crisis.

'Dark Day' for Europe as EU-Turkey Deal Becomes a 'Dangerous' Reality
While it would be an attempt to further lessen the incentive for people to make the dangerous voyage to Europe via the Mediterranean, any deal to return asylum seekers and migrants back to North Africa would run into stiff opposition on human rights grounds.

Critics of the EU-Turkey deal say it will not halt the number of people looking to travel to Europe, but will merely shift the problem to other areas, such as Libya in North Africa, and Bulgaria's border with Turkey.

This fear has led a number of EU member states taking up actions aimed at preventing the establishment of further migrant routes, with Austria announcing that soldiers would be deployed to key transit points along the country's border with Italy.

"As the EU's external borders are not yet effectively protected, Austria will soon ramp up strict border controls. That means massive border controls at the Brenner Pass, and with soldiers," Defense Minister Peter Doskozil said.

There are fears the Mediterranean route may become the main transit route for refugees and migrants looking to enter Europe, with the unstable situation in Libya playing into the hands of people smuggling syndicates.

Italian Interior Ministry figures revealed more than 16,000 people trying to reach Europe were rescued in the Mediterranean Sea in the first three months of 2016 — that's 6,000 more people than during the same time period last year, sparking fears the migration crisis could worsen in 2016.