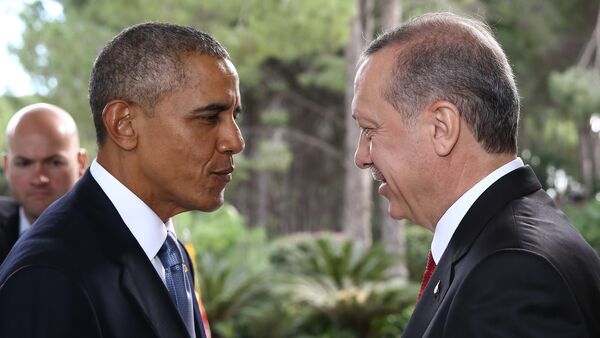 President of Turkey Recep Tayyip Erdogan announced during his visit to the United States that Washington and Ankara are moving towards finding common ground in their approach to Kurdish forces in Syria.

President Erdogan announced the developments that may bring a long-standing difference to a close.

"We've reached a point where US and Turkey are close to getting on the same page regarding our approach toward the Syrian Kurdish nationalist Democratic Union Party (PYD) and Kurdish self-defense units. [US President Barack] Obama, [Secretary of State John] Kerry and [Vice President Joe] Biden said that they wouldn't allow formation of the Kurdish state in northern Syria. Our determination to stand against such possibility is well known," Erdogan told reporters, as cited by Hurriyet.

"We have handed to the US a list of 1800 people ready to fight Daesh [IS] on the north of Syria, there will be a list of 600 more. They are trained Arab and Turkmenian fighters."

He added that taking this into account, there is no need for the US to insist on supporting Syrian Kurds under the excuse of fighting Daesh.

Turkey May Play Constructive Role in Syrian Reconciliation - US Congressman
Washington had been relying on Kurds in Syria in the fight against Daesh terrorists. In the past, Erdogan repeatedly criticized the US for supporting the PYD (Ankara believes the PYD is connected with the Kurdistan Workers Party which is prohibited in Turkey) and called for US authorities to ‘make a choice' between Turkey and the PYD.

However, Washington refuses to see PYD as a terrorist organization and consistently demanded that Ankara stops bombardment of Kurdish positions in the Syrian border area.