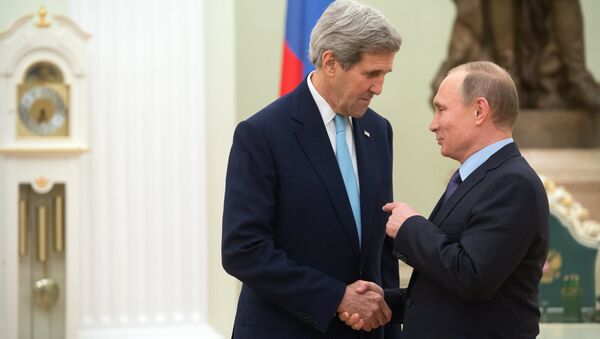 © Sputnik / Sergey Guneev
/
Go to the mediabank
Subscribe
International
India
Africa
While outlining the results of the Russian military operation in Syria on March 17, Russian President Vladimir Putin underscored that Moscow has built "positive and constructive cooperation with Washington." Russia and the US are currently cooperating on the Syrian crisis in the Middle East.

"This can be described as a convergence of interests. Barack Obama and Vladimir Putin have travelled a long way together – should it be the fight against terrorism or stabilizing the situation in Syria," an article in Le Monde read.

In early-February, Moscow and Washington built up pressure to reach a ceasefire in the Syrian war. Previously, over the course of nearly six months, Russia carried out massive airstrikes. They contributed to strengthening government control over many parts of Syria.

What is more, as a result Russia has re-emerged as one of the key players in the Middle East, according to the article.

World
Russia, US Share Understanding on Strengthening Syria Ceasefire - Moscow
The author underscored that in the current situation the progress, especially in the peace talks, should be preserved and developed.

"Russian Foreign Minister Sergei Lavrov and his US counterpart John Kerry are doing well. This is an example of a win-win partnership. The US pressured Syrian opposition groups to send their representatives to Geneva. In turn, Russia guarantees the observation of the ceasefire by Damascus," the article read.

According to the author, despite the fact that the current ceasefire is fragile, significant progress has been made by joint Russian and US peace efforts.

"The Russian withdrawal from Syria was a signal to Bashar Assad to find a political solution to the crisis. After Palmyra was liberated Russia reaffirmed its commitment to the fight against terrorism," the article read.

After Moscow and Washington got involved in the process the situation got off the ground. The US has abandoned calls for Assad’s resignation. At the same time, Russia is more interested in preserving Syria’s territorial integrity than keeping Assad in power. The US now shares this approach.

Moscow and Washington are ready to consider the decentralization and federalization of Syria. However, this idea was rejected by both Damascus and the opposition.

"However, this doesn’t matter. Moscow and Washington like acting together. This means Russia has returned to the club of great powers, like in the old days," the author pointed out.