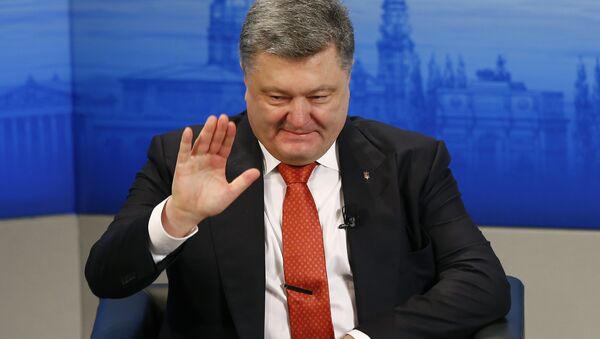 Despite the fact that Ukraine is in a perpetual political and economic crisis, it appears that President Petro Poroshenko has been setting up a system to avoid paying millions in taxes to the beleaguered nation.

Biggest Ever Data Leak Reveals Firms Linked to World’s Most Powerful People
Journalists have obtained reams of documents from Panamanian law firm Mossack Fonseca & Co. which have revealed how a number of the wealthiest people in the world — including major global leaders — have parked assets abroad to avoid paying taxes in their home countries.

Among those who have done so is Ukraine President Petro Poroshenko who appears to have sent assets of Poroshenko's confectionary empire Roshen offshore, where it can be sold without paying any taxes to Ukraine's government.

The Kiev Post reports that Poroshenko confidants started the registration process of an offshore company in the British Virgin Islands in August 2014, a time when Ukraine was engaged in the height of a political crisis.

Poroshenko, a billionaire was busy starting the offshore company as a way to evade paying taxes to the country in need of such income.

Poroshenko Offended After US Media Refers to Ukraine as 'Corrupt Swamp'
Poroshenko had promised to sell Roshen during his campaign for president in spring of 2014 nearly two years later, he still hasn’t sold the company but it appears his intention was to sell it in a way in which he could pocket receipts that should have gone to his government and people.

Hromadske TV reached out to Poroshenko staff about the matter but were redirected to Avellum Partners, a law firm which provided a recommendation letter to register the company.

According to the Kiev Post, that statement contradicts Poroshenko statement in January that he has already transferred his Roshen assets to a blind trust.