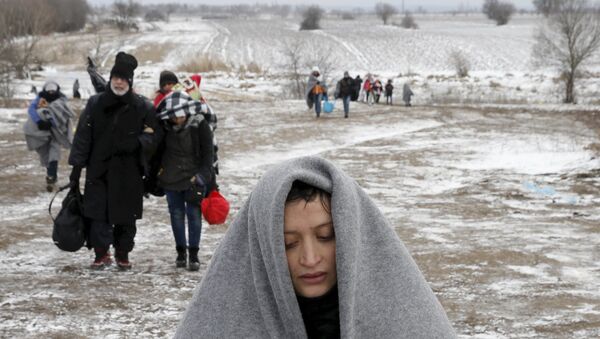 The joint Russian-Serbian humanitarian center in the city of Nis is assisting in the reception of refugees, in particular, aids with equipping several temporary accommodation centers for migrants, Russian Foreign Minister Sergei Lavrov said Friday.

MOSCOW (Sputnik) — The emergency response Russian-Serbian Humanitarian Center was opened in Nis in 2012.

"Some proceeded in transit to other countries, some stayed in Serbia. And through our joint humanitarian center of the city of Nis, we have made efforts in order to equip a few receiving points for a temporary stay of refugees. We will provide our Serbian friends with other assistance so they can cope with this process," Lavrov said during a press conference following talks with Serbian Foreign Minister Ivica Dacic.

People waiting 4 hours w/o food or shelter at Hungary-Serbia border fence to get into transit zone to apply 4 asylum pic.twitter.com/97MMStf4yO

​Lavrov added that about 600,000 undocumented migrants passed through the territory of Serbia in 2015.

Europe has been beset by a massive refugee crisis, with hundreds of thousands of undocumented migrants fleeing their home countries in the Middle East and North Africa to escape violence and poverty. The Frontex EU border agency detected over 1.85 million illegal border crossings in 2015.