A Reason to Fear: Losing Palmyra Spells Trouble Ahead for Daesh 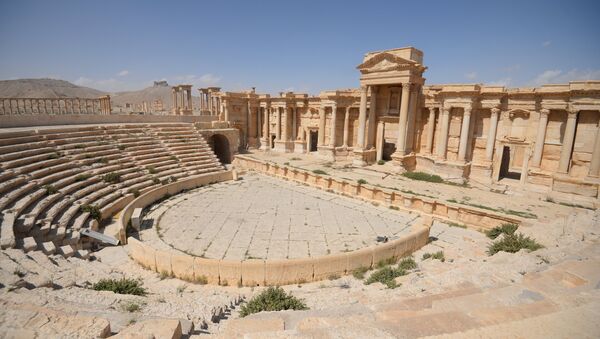 In its analysis of the strategic importance of the liberation of the ancient heritage site of Palmyra by the Syrian government forces with the help of Russian air strikes, Stratfor shifted the focus to analyze not the gains it gives the government, but the troubles it brings to the jihadists.

Why Western Media Try to Downplay the Importance of Palmyra's Liberation
"On a tactical level, the operation greatly reduced the Islamic State's ability to threaten key government supply lines, especially along the M5 highway and the road to Aleppo," Stratfor Strategic Forecasting private intelligence company, sometimes referred at as "the shadow CIA," says in its analysis on the recent anti-terrorist victory.

In particular, the loyalist forces can be expected to push hard to relieve the besieged 104th Republican Brigade at Deir el-Zour.

The agency further notes that "with major offensive operations largely halted on a number of fronts between the rebels and the government, both Damascus and the rebellion have finally shifted the bulk of their attention toward pushing back the Islamic State (Daesh), which is not party to the cease-fire."

Liberation of Palmyra Marks Ending of Daesh's Reign of Terror in Syria
The Islamic State has taken note, it goes on, accusing loyalist and rebel forces of having colluded in an unholy alliance against it.

"Though this is objectively not the case, the Islamic State is right to fear the cease-fire effort. As long as the lull in fighting between the rebels and the government persists, the Islamic State will continue to suffer from their redirected efforts," Stratfor suggests.

What the agency forgot to mention, is that the pro-government forces have also launched an operation to seize the town of Quraytayn which is located south from the Tiyas Crossroads.

According to the International Military Review, published on the South Front analytical and intelligence website, the Syrian forces have already taken Hazm al-Gharbiyat and have been advancing on the western gates.

World
Global Media Praise Palmyra Liberation as Victory for Damascus and Moscow
Quraytayn, it says, is also in an important logistical position, and its liberation will increase the SAA’s freedom of operation in the province.

"In a separate development, the SAA and Hezbollah units have liberated the Air Defense Base at the village of Bala al-Kadim and the nearby Zahir Farm pushing Al-Nusra militants from this area in East Ghouta."

The Syrian forces control Haush Jarabo, making it very difficult for Jaish al-Islam, Jabhat al-Nusra and the Free Syrian Army to retreat from the pocket. If Haush Jarabo is seized by the pro-government forces, the strategic situation will become hopeless for the militants encircled there, the analysis states.

It seems that the Islamic State, as Stratfor suggests, really do have a reason to fear.