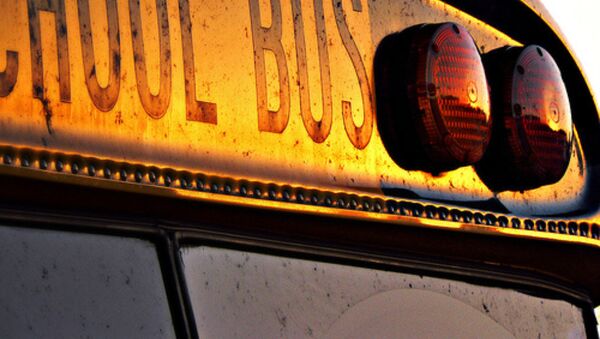 CC BY 2.0 / iboy_daniel / after school special
Subscribe
International
India
Africa
A Virginia school district shuttled children around this week in a bus that had “explosive training material” under the hood, left behind after a CIA training exercise.

Mold, Rats, Debris: Detroit Teachers Sue Over School Conditions
The materials were left in the engine compartment of a Loudoun County school bus last week, during a training scenario for explosives-detecting dogs. CIA officials claimed in a statement to the Washington Post that their forgetfulness “did not pose a danger to passengers on the bus.”

According to Loudoun schools spokesman Wayde Byard, the explosive material was a putty-like blob that requires a special detonator. Byard said  that the school department was informed of the material, but were told by the CIA not to disclose what it was.

During the exercise on Thursday, the dog found the material, but apparently some had fallen away from where it was placed and landed deeper within the engine compartment and became wedged between hoses.

En Garde: France to Stage Mock 2016 Fan Zone Attack in Anti-Terror Drill
The material was discovered and removed by the CIA and fire marshals after a routine inspection and after the bus had carried 26 students on eight runs, totaling some 145 miles on Monday and Tuesday.

“The training materials used in the exercises are incredibly stable and according to the CIA and Loudoun County explosive experts the students on the bus were not in any danger from the training material,” the Sheriff’s Office claimed in a statement.

On Thursday, school officials met with the CIA, the Loudoun County Sheriff’s Office, as well as the fire marshal and county administrators. The use of public education assets to train law enforcement in live explosive exercises has been halted until new safety protocols are enacted.