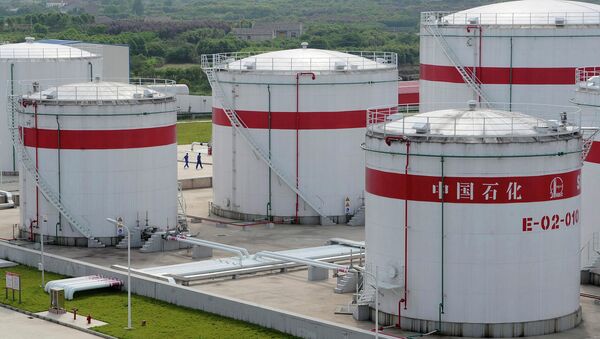 Around 50 percent of all oil exports to China will be accounted for by the Middle East, according to Unipec's forecasts.

China Confirms Readiness to Import 27Mln Tonnes of Russian Oil in 2016
BEIJING (Sputnik) — The Middle East region remains the main oil exporter to China, but the supply of crude oil from the former Soviet Union countries is expected to increase, the vice president of Unipec, a subsidiary of China's oil giant Sinopec, said Thursday.

"According to our forecasts, the Middle East remains the main market of oil imports to China. We also assume that the countries of the former Soviet Union, the United States and other states will increase the volume of its oil exports to the Chinese market," Zhong Fu Liang said at the China-Russia Oil & Gas 2016 event in Beijing.

According to Unipec's forecasts, around 50 percent of all oil exports to China will account for the Middle East. Crude oil imports from the former Soviet Union and the United States to China are expected to show a relatively rapid growth.

China May Surpass US in 2016 Crude Oil Imports
According to the March report of the Organization of the Petroleum Exporting Countries, China's main oil suppliers in January were Saudi Arabia, Russia and Angola, with 16, 13 and 11 percent of total oil imports to the country, respectively.

Unipec was founded in 1993 and is the largest Chinese international trade company. Unipec's business covers trade in crude oil, oil products and liquefied natural gas, as well as warehousing and logistics.