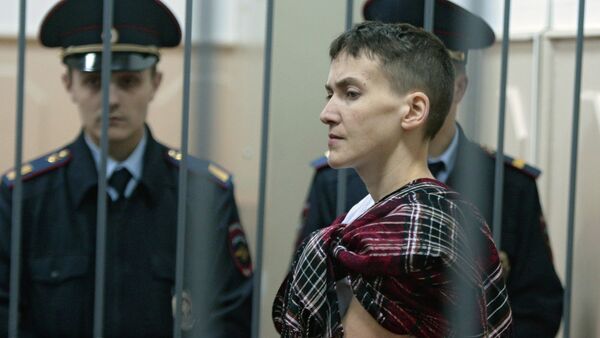 © Sputnik / Mikhail Voskresenskiy
/
Go to the photo bank
Subscribe
Kiev is ready for any compromise solution with regard to the issue of Ukrainian national Nadezhda Savchenko's exchange, Ukraine’s Security Service (SBU) said Wednesday.

Ukrainian Pilot Savchenko Sentenced to 22 Years in Jail
KIEV (Sputnik) — On Monday, media reported about confidential talks on the Savchenko swap for the Russian nationals imprisoned in the United States, including alleged arms dealer Viktor Bout and pilot Konstantin Yaroshenko. The following day, spokesman for the US Embassy in Moscow William Stevens said the White House was not considering possibility of exchanging Savchenko for Yaroshenko and Bout, both serving a lengthy jail terms in US prisons.

"Negotiations are underway. Our side has done everything to free Nadezhda…We are ready for any compromise," Yuriy Tandit, a negotiator of the SBU center in charge of prisoner exchanges, said in an interview aired by Ukraine's 112 television.

According to Ukrainian Deputy Foreign Minister Vadym Prystaiko, Kiev is ready to swap Savchenko only for Russian nationals Alexander Aleksandrov and Yevgeni Yerofeev, who were captured in the conflict zone in eastern Ukraine last year while allegedly fighting on the side of the local militia.

Last week, Savchenko received a 22-year prison sentence after being convicted in a Russian court of directing artillery that killed Russian journalists Igor Kornelyuk and Anton Voloshin in eastern Ukraine on June 17, 2014.