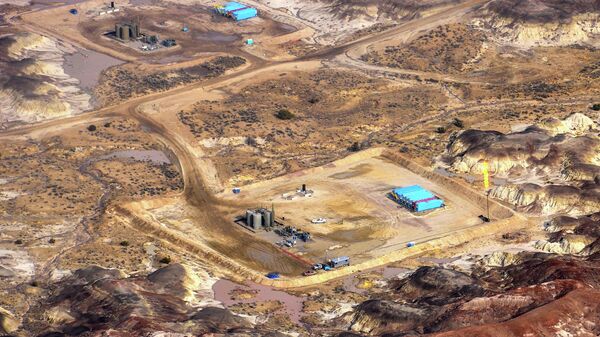 The half of the interviewed US citizens oppose drilling shale gas and oil.

MOSCOW(Sputnik) – The share of US citizens who oppose drilling for shale gas and oil in a process known as hydraulic fracturing, or fracking, has risen from 40 percent in 2015 to over 50 percent this year, a poll by the US-based research company Gallup revealed Wednesday.

"In Gallup's 2016 Environment survey, conducted March 2-6, Americans have a clearer position on fracking than they did a year ago. In 2016, support for fracking has slipped to 36%, while opposition has climbed to 51%," the survey results showed.

First Shipment of US Shale Gas en Route to Europe
In 2015, some 40 percent of US respondents to the poll said they supported fracking while the same percentage of those polled opposed it, with a substantial — 19 percent — share of the public unaware of or having no opinion on the controversial extraction method.

Fracking is a process in which water mixed with chemicals is pumped underground at high pressure to break apart rock formations to release oil or natural gas to wellheads.