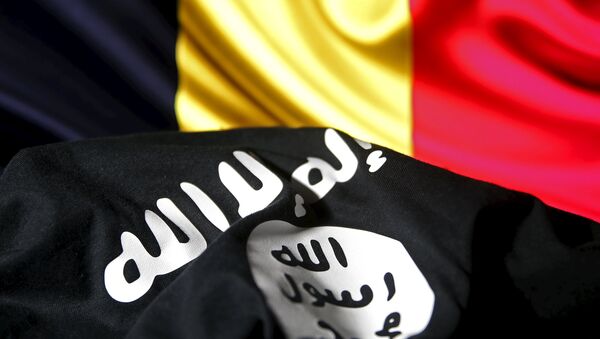 © REUTERS / Dado Ruvic/Illustration
Subscribe
Faced with intense bombing by western forces of its territory in Iraq and Syria, Daesh - also known as ISIL - is now unleashing its hidden cells within Europe as part of its plans to exploit "Muslim No-Go Zones" established as far back as 2012.

According to a 99-page manifesto, 'Black Flags from Rome' — which intelligence agencies have been aware of since January 2015 — radicalized Muslims from who have been trained in Syria were told to form 'sleeper' cells in Europe — particularly in areas of cities and towns that were heavily populated by Muslims.

In an ebook published by ISIS called "Black Flags from Rome" the unholy alliance b/t Left & jihadists is explained pic.twitter.com/lCHqOIB2lh

The manifesto states that: "While the experienced Islamic State fighters left Syria for Europe, the European Muslims who had emigrated to the Islamic State would train within the Training camps, and nobody doubted — neither the Islamic State, nor the West — that some of these trainees would be sent back to Europe to form their own secret cells to continue the Jihad and to seek revenge for the Western occupation of Muslim lands.

Daesh Using Locally-Born Europeans to Carry Out Attacks - Terror Expert
These fighters would simply receive their training and be told to go back to their European home countries, to go into 'sleeper cell' mode until the Khalifah (Caliph) Abu Bakr al-Baghdadi ordered to start attacks in Europe."

"They were quick to take the opportunity of entering into the different countries of Europe (most probably as early as 2012). All this was happening under the nose of the European intelligence services whose job during this time (2012) was only to prevent European Muslims from entering Syria. (This shows how quick the Islamic groups were in planning ahead. Years before Europe even knew where its Muslim citizens were going — experienced Islamic fighters had already found safety in Europe.)

"Europe and American intelligence agencies had never seen anything like this before in their war against Muslims in the West. When Al Qa'idah was the threat (throughout the 2000s), they were looking for untrained and armed individuals who were lone wolves who were vulnerable," the manifesto states.

The Brussels and Paris attacks were all centered on Belgium which is seen as a soft touch in Europe because of its fragmented government and law enforcement systems, leading to a lack of intelligence about Muslim communities.

The mayor of Molenbeek — dubbed a "terrorists' den" because of the sheer number of jihadists living there — in November admitted receiving a list of 80 suspected Islamic militants living in the area. It included Abaaoud, who was killed outside Paris, along with Salah Abdeslam and his brother Brahim, who blew himself up.

Dr Peter Neumann, director of the International Centre for the Study of Radicalization said in his latest analysis of the attacks: "Like many European cities, Brussels has neighborhoods that have become migrant ghettos after decades of neglect by the state and society. There are clear signs of social and economic deprivation in these areas, fostering alienation and marginalization. Extremists have been able to exploit this vacuum, particularly in Brussels, which has entrenched jihadist recruitment structures."

000000
Popular comments
Skum suporters now attacking europe and they are meant to be allies ... ROFLOL
backfromthegraav
30 March 2016, 14:38 GMT
000000
Another ISIS-manifesto from Schlomo & Schlomo Co in Tel Aviv. It means that USrael has big plans for Europe but it ain´t no good news for Europeans who are too indoctrinated, depraved and dysfunctional to notice it anyway. Only Russia and her God-fearing allies are their only hope now, like they´v been before.