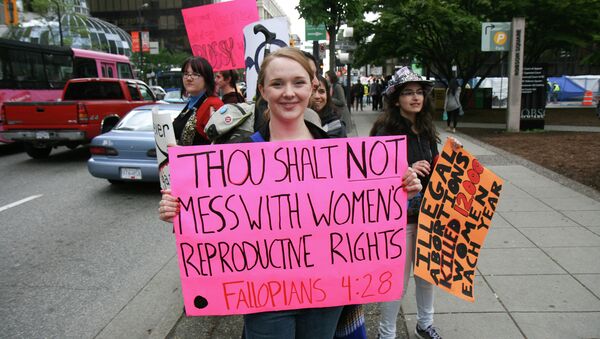 © Flickr / Sylvia McFadden
Subscribe
Utah is now the only state to mandate that doctors place women having abortions after 20 weeks into their pregnancy under anesthesia, adding greater risk to the procedure.

Republican Governor Gary Herbert signed the controversial bill, based on the disputed claim that a fetus can feel pain after 20 weeks, into law on Monday evening. The debate over whether a fetus can feel pain before the third trimester has been widely contested by doctors and health professionals nationwide.

Republican State Senator Curt Bramble, who sponsored the bill, acknowledged that the evidence of fetal pain so early in a pregnancy is inconclusive, and is only imposing anesthesia “to be on the safe side.”

At a hearing in March, Bramble, an accountant with no medical certification, stated "the science is inconclusive on whether a [20-week-old] fetus can feel pain, so 'to be on the safe side' heavy anesthesia should be administered."

In 2005, the Journal of the American Medical Association published a "rigorous scientific review of the available evidence on fetal pain" and determined that "fetal perception of pain is unlikely before the third trimester," as reported by Common Dreams.

Additionally, a 2010 review by the Royal College of Obstetricians and Gynecologists in the UK found that "connections from the periphery to the cortex are not intact before 24 weeks of gestation and, as most neuroscientists believe that the cortex is necessary for pain perception, it can be concluded that the fetus cannot experience pain in any sense prior to this gestation."

"You're talking to a woman who is being told that Curt Bramble, a CPA, is better at practicing medicine than the physician I have chosen," Karrie Galloway, executive director of Planned Parenthood of Utah told the Salt Lake City Tribune. "That's what's infuriating."

"I mean, we have fetal medical specialists speaking and they were discounted by a citizen who said, 'I read it on the Internet and therefore it must be true,'" Galloway continued. "That's how we do policy here in Utah."

The state has always allowed women the option of being placed under anesthesia during the procedure, but it was not previously mandatory. The forced anesthesia adds what many believe is an undue risk of asphyxiation and death.

The Salt Lake Tribune noted that in 2014, the most recent year that numbers are available, only 17 women opted to abort their pregnancies after 20 weeks.