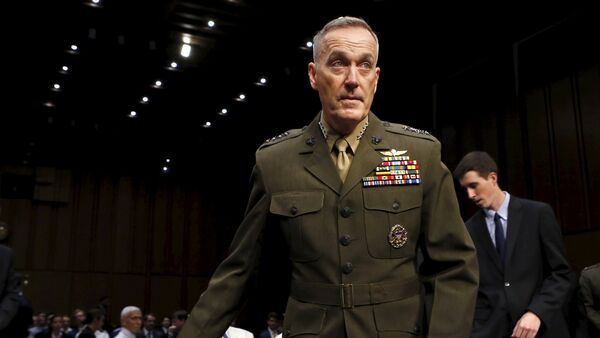 Despite the economic and demographic challenges facing Russia, it has made a significant investment in military capabilities and demonstrated ability to project power in multiple regions simultaneously, according to General Dunford.

Pentagon Cannot Account for $223Mln in Anti-Daesh Operation Orders
WASHINGTON (Sputnik) — The advancements made by the Russian military present the United States with the most diverse threats to its interests, US Chairman of the Joint Chiefs of Staff Gen. Joseph Dunford said on Tuesday.

"First, the Russian military presents the greatest array of threats to US interests," Dunford said in a speech to the Center for Strategic International Studies.

The general added that despite the economic and demographic challenges facing Russia, it has made a "significant investment in military capabilities."

Nevertheless, the general insisted, the US and Russia should continue military talks, despite the challenging political relationship.

"I believe we should maintain military to military communication and relationships in the worst of times. We did it throughout the Cold War, we should do it now," Gen. Dunford said in a speech at the Center for Strategic International Studies.

He also added that US combatant commanders will meet next week in a quarterly session to address the challenge of adversarial military action registering below the threshold of overt conflict, or hybrid warfare.

"Next Wednesday, we have a quarterly session with the combatant commanders… the first day, this is the topic," Dunford said at the Center for Strategic International Studies referring to the challenge of hybrid warfare confronting the United States.

Citing Russia as a case study of an adversary that has "fully integrated the whole of government" in alleged hybrid warfare in Georgia, Ukraine and the Baltics, Dunford noted that conflict below the threshold of war, including in the information domain, is "one of the most difficult significant challenges" the United States faces.

"We owe our leadership the clarity on the military dimension of dealing with this challenge," Dunford argued.

The United States and NATO have accused Russia of exploiting so-called "grey zones" of conflict in eastern Europe, allegedly undermining western interests. Moscow has repeatedly refuted allegations of engaging in conflict in the region.