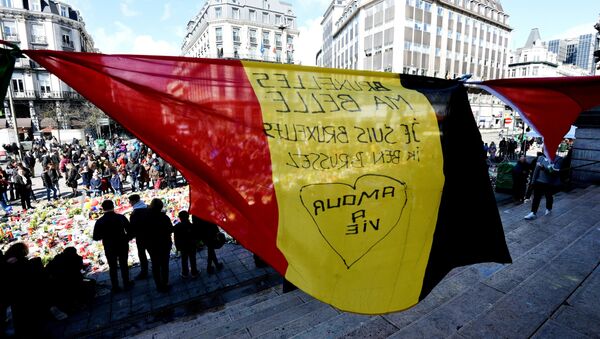 © AFP 2021 / Patrik Stollarz
Subscribe
The fragmented nature of government in Belgium has led to basic failures to tackle jihadism in the country, which has seen the highest number of nationals per capita in Europe travel to Syria to join militant groups.

Critics say politicians have failed to realize the extent of radicalization and provide the police and security services with enough resources to deal with the situation, allowing radicalized Muslims to control ghettos in many areas of the country.

In the aftermath of the Brussels bombings, the Belgian police and intelligence services have been heavily criticized for a lack of coordination, with the police accused of being uncoordinated and out-of-touch with the communities they serve.

Security experts have expressed concern that Europe's most-wanted man — Salah Abdeslam, who went on the run after failing to detonate his bomb in the November 13, 2015 Paris attacks — was able to remain in Brussels undetected for four months.

Dr Peter Neumann, director of the International Centre for the Study of Radicalization (ICSR) said in his latest analysis of the attacks: "Compared to other western countries, Belgium is particularly vulnerable to jihadist terrorism for the following reasons: First, the country has an especially longstanding and well-organized network of radical Islamist recruiters. Second, its police and intelligence agencies lack the resources to counter the surge in jihadist recruiting over the last five years.

"Counter-terrorism officers in Belgium will readily admit that they are overwhelmed by the numbers of suspected jihadists in the country. The gap between the size of the terrorist threat and the capabilities of Belgium's security apparatus is perhaps the largest in Europe."

Quoting @PeterRNeumann: “Everybody wants information from others, but nobody wants to share”. https://t.co/6bJ1VYUDXy

"Like many European cities, Brussels has neighborhoods that have become migrant ghettos after decades of neglect by the state and society. There are clear signs of social and economic deprivation in these areas, fostering alienation and marginalization. Extremists have been able to exploit this vacuum, particularly in Brussels, which has entrenched jihadist recruitment structures," said Neumann.

'Politicians Have No Idea'

An estimated 500 Belgian nationals have traveled to Syria or Iraq with the intention of joining militant groups.

European Council Reveals Gaps in EU Security Before Brussels Attacks
ICSR research indicates it is the highest number per capita in Europe. However, the Belgian intelligence services do not have the resources to track all of them.

At the time of the Paris attacks, in November 2015, the security services had a staff complement of just 700, with 150 posts unfilled and an annual budget of just US$56 million — which Belgian media have pointed out is nothing more than the editorial budget of a large newspaper.

Bernard Snoeck, a former employee in the Belgian military intelligence service SGRS, is quoted in Der Spiegel as saying:

"Politicians have no idea how we work. And they don't want to know, either. In my more than 20-year career, I never saw a single member of parliament in our offices."

Because of a false notion of tolerance, he said, Belgians are "unwilling to touch jihadism. It reminds me of the period after 9/11. We had information about Islamists in the army. We wanted to investigate this more closely, but the Defense Ministry stopped the investigation."