Passenger Confirms No ID Check Before Boarding Hijacked Egyptian A320 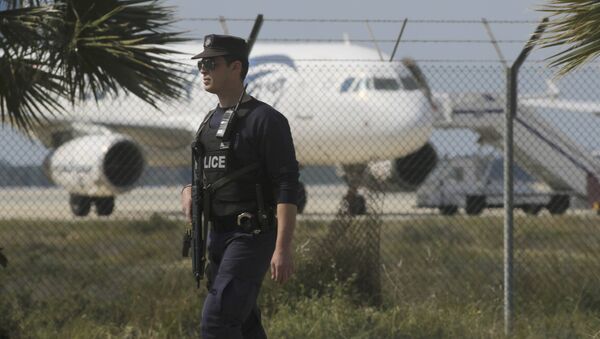 © REUTERS / Yiannis Kourtoglou
Subscribe
The passengers of hijacked EgyptAir A320 airliner suspected that something was wrong when the plane changed its course and flew over the sea, according to local media.

Egyptian Jet Lands in Cyprus to Pick Up Passengers of Hijacked A320
MOSCOW (Sputnik) — Police at Alexandria's Borg El Arab International Airport did not perform identity checks on passengers who boarded the subsequently hijacked EgyptAir A320 airliner, a passenger told local media Tuesday.

Earlier in the day, a man, identified as Seif Eldin Mustafa, hijacked an Airbus A320 with 81 people on board en route from Egypt’s Alexandria to Cairo. The plane subsequently landed in Cyprus' Larnaca airport.

"Fifteen minutes after taking off from the Burg al-Arab airport the airline staff began checking our papers. We were surprised, because it was a domestic flight, in such cases passports are never checked even at the airport," Ibrahim Samaha, who has been initially misidentified as the hijacker, told the Akhbar El Yom newspaper.

EgyptAir A320 Hijacker Arrested
Samaha added that the passengers suspected that something was wrong when the plane changed its course and flew over the sea.

"When people started asking questions, the crew informed us that the aircraft had been hijacked and was being redirected to Larnaca," the passenger said.

None of the passengers or crew members sustained injuries during the incident, according to Egypt's Ministry of Civil Aviation. The hijacker has been detained.